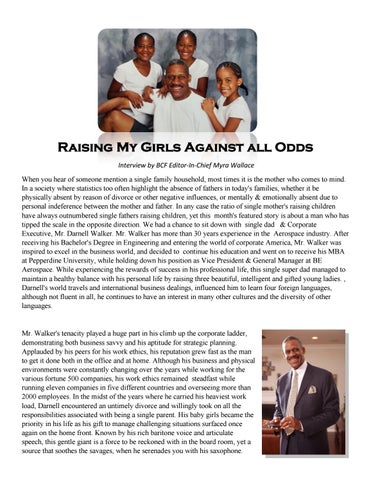 Raising My Girls Against all Odds Interview by BCF Editor-In-Chief Myra Wallace When you hear of someone mention a single family household, most times it is the mother who comes to mind. In a society where statistics too often highlight the absence of fathers in today's families, whether it be physically absent by reason of divorce or other negative influences, or mentally & emotionally absent due to personal indeference between the mother and father. In any case the ratio of single mother's raising children have always outnumbered single fathers raising children, yet this month's featured story is about a man who has tipped the scale in the opposite direction. We had a chance to sit down with single dad & Corporate Executive, Mr. Darnell Walker. Mr. Walker has more than 30 years experience in the Aerospace industry. After receiving his Bachelor's Degree in Engineering and entering the world of corporate America, Mr. Walker was inspired to excel in the business world, and decided to continue his education and went on to receive his MBA at Pepperdine University, while holding down his position as Vice President & General Manager at BE Aerospace. While experiencing the rewards of success in his professional life, this single super dad managed to maintain a healthy balance with his personal life by raising three beautiful, intelligent and gifted young ladies. , Darnell's world travels and international business dealings, influenced him to learn four foreign languages, although not fluent in all, he continues to have an interest in many other cultures and the diversity of other languages.

Mr. Walker's tenacity played a huge part in his climb up the corporate ladder, demonstrating both business savvy and his aptitude for strategic planning. Applauded by his peers for his work ethics, his reputation grew fast as the man to get it done both in the office and at home. Although his business and physical environments were constantly changing over the years while working for the various fortune 500 companies, his work ethics remained steadfast while running eleven companies in five different countries and overseeing more than 2000 employees. In the midst of the years where he carried his heaviest work load, Darnell encountered an untimely divorce and willingly took on all the responsibilities associated with being a single parent. His baby girls became the priority in his life as his gift to manage challenging situations surfaced once again on the home front. Known by his rich baritone voice and articulate speech, this gentle giant is a force to be reckoned with in the board room, yet a source that soothes the savages, when he serenades you with his saxophone.