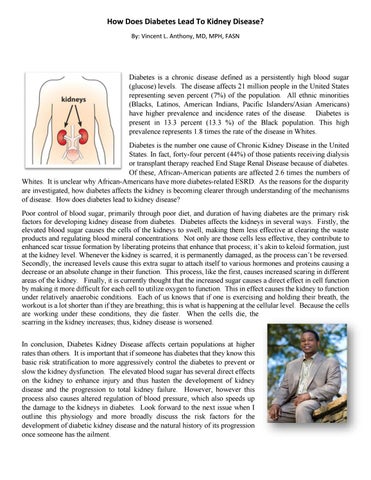 Diabetes is a chronic disease defined as a persistently high blood sugar (glucose) levels. The disease affects 21 million people in the United States representing seven percent (7%) of the population. All ethnic minorities (Blacks, Latinos, American Indians, Pacific Islanders/Asian Americans) have higher prevalence and incidence rates of the disease. Diabetes is present in 13.3 percent (13.3 %) of the Black population. This high prevalence represents 1.8 times the rate of the disease in Whites. Diabetes is the number one cause of Chronic Kidney Disease in the United States. In fact, forty-four percent (44%) of those patients receiving dialysis or transplant therapy reached End Stage Renal Disease because of diabetes. Of these, African-American patients are affected 2.6 times the numbers of Whites. It is unclear why African-Americans have more diabetes-related ESRD. As the reasons for the disparity are investigated, how diabetes affects the kidney is becoming clearer through understanding of the mechanisms of disease. How does diabetes lead to kidney disease? Poor control of blood sugar, primarily through poor diet, and duration of having diabetes are the primary risk factors for developing kidney disease from diabetes. Diabetes affects the kidneys in several ways. Firstly, the elevated blood sugar causes the cells of the kidneys to swell, making them less effective at clearing the waste products and regulating blood mineral concentrations. Not only are those cells less effective, they contribute to enhanced scar tissue formation by liberating proteins that enhance that process; itâ&#x20AC;&#x2122;s akin to keloid formation, just at the kidney level. Whenever the kidney is scarred, it is permanently damaged, as the process canâ&#x20AC;&#x2122;t be reversed. Secondly, the increased levels cause this extra sugar to attach itself to various hormones and proteins causing a decrease or an absolute change in their function. This process, like the first, causes increased scaring in different areas of the kidney. Finally, it is currently thought that the increased sugar causes a direct effect in cell function by making it more difficult for each cell to utilize oxygen to function. This in effect causes the kidney to function under relatively anaerobic conditions. Each of us knows that if one is exercising and holding their breath, the workout is a lot shorter than if they are breathing; this is what is happening at the cellular level. Because the cells are working under these conditions, they die faster. When the cells die, the scarring in the kidney increases; thus, kidney disease is worsened. In conclusion, Diabetes Kidney Disease affects certain populations at higher rates than others. It is important that if someone has diabetes that they know this basic risk stratification to more aggressively control the diabetes to prevent or slow the kidney dysfunction. The elevated blood sugar has several direct effects on the kidney to enhance injury and thus hasten the development of kidney disease and the progression to total kidney failure. However, however this process also causes altered regulation of blood pressure, which also speeds up the damage to the kidneys in diabetes. Look forward to the next issue when I outline this physiology and more broadly discuss the risk factors for the development of diabetic kidney disease and the natural history of its progression once someone has the ailment.