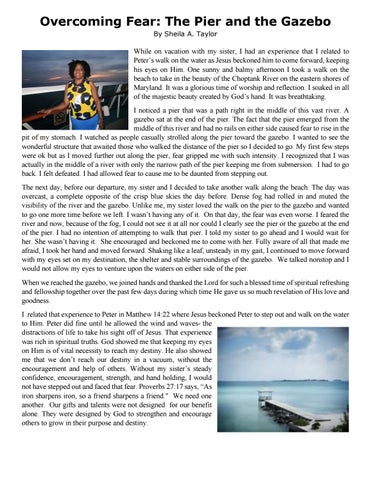 Overcoming Fear: The Pier and the Gazebo By Sheila A. Taylor

While on vacation with my sister, I had an experience that I related to Peter’s walk on the water as Jesus beckoned him to come forward, keeping his eyes on Him. One sunny and balmy afternoon I took a walk on the beach to take in the beauty of the Choptank River on the eastern shores of Maryland. It was a glorious time of worship and reflection. I soaked in all of the majestic beauty created by God’s hand. It was breathtaking. I noticed a pier that was a path right in the middle of this vast river. A gazebo sat at the end of the pier. The fact that the pier emerged from the middle of this river and had no rails on either side caused fear to rise in the pit of my stomach. I watched as people casually strolled along the pier toward the gazebo. I wanted to see the wonderful structure that awaited those who walked the distance of the pier so I decided to go. My first few steps were ok but as I moved further out along the pier, fear gripped me with such intensity. I recognized that I was actually in the middle of a river with only the narrow path of the pier keeping me from submersion. I had to go back. I felt defeated. I had allowed fear to cause me to be daunted from stepping out. The next day, before our departure, my sister and I decided to take another walk along the beach. The day was overcast, a complete opposite of the crisp blue skies the day before. Dense fog had rolled in and muted the visibility of the river and the gazebo. Unlike me, my sister loved the walk on the pier to the gazebo and wanted to go one more time before we left. I wasn’t having any of it. On that day, the fear was even worse. I feared the river and now, because of the fog, I could not see it at all nor could I clearly see the pier or the gazebo at the end of the pier. I had no intention of attempting to walk that pier. I told my sister to go ahead and I would wait for her. She wasn’t having it. She encouraged and beckoned me to come with her. Fully aware of all that made me afraid, I took her hand and moved forward. Shaking like a leaf, unsteady in my gait, I continued to move forward with my eyes set on my destination, the shelter and stable surroundings of the gazebo. We talked nonstop and I would not allow my eyes to venture upon the waters on either side of the pier. When we reached the gazebo, we joined hands and thanked the Lord for such a blessed time of spiritual refreshing and fellowship together over the past few days during which time He gave us so much revelation of His love and goodness. I related that experience to Peter in Matthew 14:22 where Jesus beckoned Peter to step out and walk on the water to Him. Peter did fine until he allowed the wind and waves- the distractions of life to take his sight off of Jesus. That experience was rich in spiritual truths. God showed me that keeping my eyes on Him is of vital necessity to reach my destiny. He also showed me that we don’t reach our destiny in a vacuum, without the encouragement and help of others. Without my sister’s steady confidence, encouragement, strength, and hand holding, I would not have stepped out and faced that fear. Proverbs 27:17 says, “As iron sharpens iron, so a friend sharpens a friend." We need one another. Our gifts and talents were not designed for our benefit alone. They were designed by God to strengthen and encourage others to grow in their purpose and destiny.