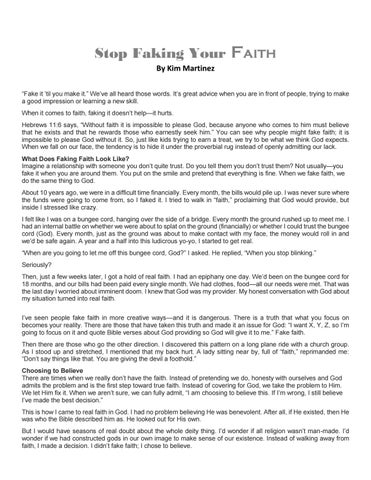 Stop Faking Your Faith By Kim Martinez “Fake it ’til you make it.” We’ve all heard those words. It’s great advice when you are in front of people, trying to make a good impression or learning a new skill. When it comes to faith, faking it doesn’t help—it hurts. Hebrews 11:6 says, “Without faith it is impossible to please God, because anyone who comes to him must believe that he exists and that he rewards those who earnestly seek him.” You can see why people might fake faith; it is impossible to please God without it. So, just like kids trying to earn a treat, we try to be what we think God expects. When we fall on our face, the tendency is to hide it under the proverbial rug instead of openly admitting our lack. What Does Faking Faith Look Like? Imagine a relationship with someone you don’t quite trust. Do you tell them you don’t trust them? Not usually—you fake it when you are around them. You put on the smile and pretend that everything is fine. When we fake faith, we do the same thing to God. About 10 years ago, we were in a difficult time financially. Every month, the bills would pile up. I was never sure where the funds were going to come from, so I faked it. I tried to walk in “faith,” proclaiming that God would provide, but inside I stressed like crazy. I felt like I was on a bungee cord, hanging over the side of a bridge. Every month the ground rushed up to meet me. I had an internal battle on whether we were about to splat on the ground (financially) or whether I could trust the bungee cord (God). Every month, just as the ground was about to make contact with my face, the money would roll in and we’d be safe again. A year and a half into this ludicrous yo-yo, I started to get real. “When are you going to let me off this bungee cord, God?” I asked. He replied, “When you stop blinking.” Seriously? Then, just a few weeks later, I got a hold of real faith. I had an epiphany one day. We’d been on the bungee cord for 18 months, and our bills had been paid every single month. We had clothes, food—all our needs were met. That was the last day I worried about imminent doom. I knew that God was my provider. My honest conversation with God about my situation turned into real faith. I’ve seen people fake faith in more creative ways—and it is dangerous. There is a truth that what you focus on becomes your reality. There are those that have taken this truth and made it an issue for God: “I want X, Y, Z, so I’m going to focus on it and quote Bible verses about God providing so God will give it to me.” Fake faith. Then there are those who go the other direction. I discovered this pattern on a long plane ride with a church group. As I stood up and stretched, I mentioned that my back hurt. A lady sitting near by, full of “faith,” reprimanded me: “Don’t say things like that. You are giving the devil a foothold.” Choosing to Believe There are times when we really don’t have the faith. Instead of pretending we do, honesty with ourselves and God admits the problem and is the first step toward true faith. Instead of covering for God, we take the problem to Him. We let Him fix it. When we aren’t sure, we can fully admit, “I am choosing to believe this. If I’m wrong, I still believe I’ve made the best decision.” This is how I came to real faith in God. I had no problem believing He was benevolent. After all, if He existed, then He was who the Bible described him as. He looked out for His own. But I would have seasons of real doubt about the whole deity thing. I’d wonder if all religion wasn’t man-made. I’d wonder if we had constructed gods in our own image to make sense of our existence. Instead of walking away from faith, I made a decision. I didn’t fake faith; I chose to believe.