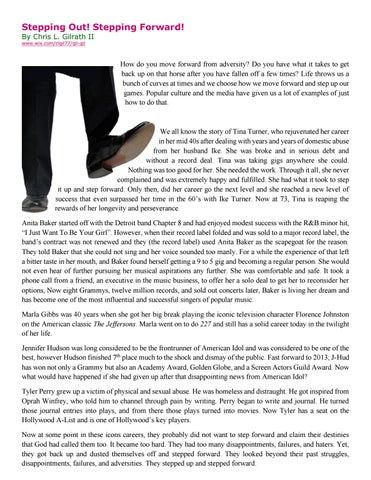 How do you move forward from adversity? Do you have what it takes to get back up on that horse after you have fallen off a few times? Life throws us a bunch of curves at times and we choose how we move forward and step up our games. Popular culture and the media have given us a lot of examples of just how to do that.

We all know the story of Tina Turner, who rejuvenated her career in her mid 40s after dealing with years and years of domestic abuse from her husband Ike. She was broke and in serious debt and without a record deal. Tina was taking gigs anywhere she could. Nothing was too good for her. She needed the work. Through it all, she never complained and was extremely happy and fulfilled. She had what it took to step it up and step forward. Only then, did her career go the next level and she reached a new level of success that even surpassed her time in the 60’s with Ike Turner. Now at 73, Tina is reaping the rewards of her longevity and perseverance. Anita Baker started off with the Detroit band Chapter 8 and had enjoyed modest success with the R&B minor hit, “I Just Want To Be Your Girl”. However, when their record label folded and was sold to a major record label, the band’s contract was not renewed and they (the record label) used Anita Baker as the scapegoat for the reason. They told Baker that she could not sing and her voice sounded too manly. For a while the experience of that left a bitter taste in her mouth, and Baker found herself getting a 9 to 5 gig and becoming a regular person. She would not even hear of further pursuing her musical aspirations any further. She was comfortable and safe. It took a phone call from a friend, an executive in the music business, to offer her a solo deal to get her to reconsider her options, Now eight Grammys, twelve million records, and sold out concerts later, Baker is living her dream and has become one of the most influential and successful singers of popular music. Marla Gibbs was 40 years when she got her big break playing the iconic television character Florence Johnston on the American classic The Jeffersons. Marla went on to do 227 and still has a solid career today in the twilight of her life. Jennifer Hudson was long considered to be the frontrunner of American Idol and was considered to be one of the best, however Hudson finished 7th place much to the shock and dismay of the public. Fast forward to 2013; J-Hud has won not only a Grammy but also an Academy Award, Golden Globe, and a Screen Actors Guild Award. Now what would have happened if she had given up after that disappointing news from American Idol? Tyler Perry grew up a victim of physical and sexual abuse. He was homeless and distraught. He got inspired from Oprah Winfrey, who told him to channel through pain by writing. Perry began to write and journal. He turned those journal entries into plays, and from there those plays turned into movies. Now Tyler has a seat on the Hollywood A-List and is one of Hollywood’s key players. Now at some point in these icons careers, they probably did not want to step forward and claim their destinies that God had called them too. It became too hard. They had too many disappointments, failures, and haters. Yet, they got back up and dusted themselves off and stepped forward. They looked beyond their past struggles, disappointments, failures, and adversities. They stepped up and stepped forward.