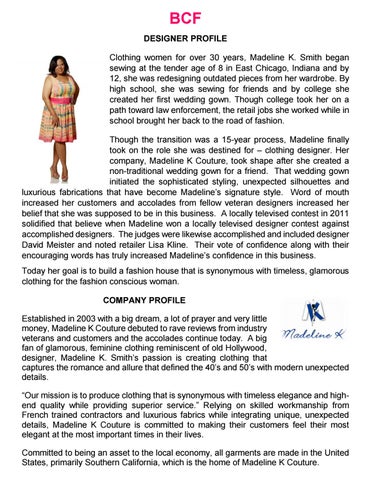 BCF DESIGNER PROFILE Clothing women for over 30 years, Madeline K. Smith began sewing at the tender age of 8 in East Chicago, Indiana and by 12, she was redesigning outdated pieces from her wardrobe. By high school, she was sewing for friends and by college she created her first wedding gown. Though college took her on a path toward law enforcement, the retail jobs she worked while in school brought her back to the road of fashion. Though the transition was a 15-year process, Madeline finally took on the role she was destined for – clothing designer. Her company, Madeline K Couture, took shape after she created a non-traditional wedding gown for a friend. That wedding gown initiated the sophisticated styling, unexpected silhouettes and luxurious fabrications that have become Madeline’s signature style. Word of mouth increased her customers and accolades from fellow veteran designers increased her belief that she was supposed to be in this business. A locally televised contest in 2011 solidified that believe when Madeline won a locally televised designer contest against accomplished designers. The judges were likewise accomplished and included designer David Meister and noted retailer Lisa Kline. Their vote of confidence along with their encouraging words has truly increased Madeline’s confidence in this business. Today her goal is to build a fashion house that is synonymous with timeless, glamorous clothing for the fashion conscious woman. COMPANY PROFILE Established in 2003 with a big dream, a lot of prayer and very little money, Madeline K Couture debuted to rave reviews from industry veterans and customers and the accolades continue today. A big fan of glamorous, feminine clothing reminiscent of old Hollywood, designer, Madeline K. Smith’s passion is creating clothing that captures the romance and allure that defined the 40’s and 50’s with modern unexpected details. “Our mission is to produce clothing that is synonymous with timeless elegance and highend quality while providing superior service.” Relying on skilled workmanship from French trained contractors and luxurious fabrics while integrating unique, unexpected details, Madeline K Couture is committed to making their customers feel their most elegant at the most important times in their lives. Committed to being an asset to the local economy, all garments are made in the United States, primarily Southern California, which is the home of Madeline K Couture.