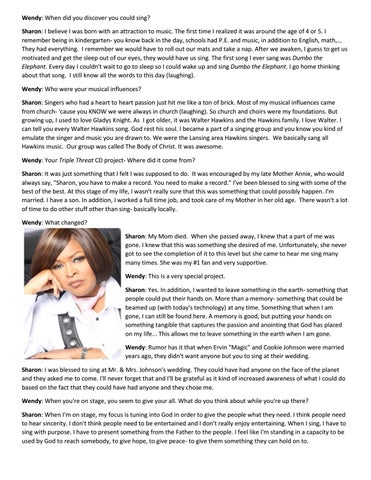 Wendy: When did you discover you could sing? Sharon: I believe I was born with an attraction to music. The first time I realized it was around the age of 4 or 5. I remember being in kindergarten- you know back in the day, schools had P.E. and music, in addition to English, math,... They had everything. I remember we would have to roll out our mats and take a nap. After we awaken, I guess to get us motivated and get the sleep out of our eyes, they would have us sing. The first song I ever sang was Dumbo the Elephant. Every day I couldn't wait to go to sleep so I could wake up and sing Dumbo the Elephant. I go home thinking about that song. I still know all the words to this day (laughing). Wendy: Who were your musical influences? Sharon: Singers who had a heart to heart passion just hit me like a ton of brick. Most of my musical influences came from church- 'cause you KNOW we were always in church (laughing). So church and choirs were my foundations. But growing up, I used to love Gladys Knight. As I got older, it was Walter Hawkins and the Hawkins family. I love Walter. I can tell you every Walter Hawkins song. God rest his soul. I became a part of a singing group and you know you kind of emulate the singer and music you are drawn to. We were the Lansing area Hawkins singers. We basically sang all Hawkins music. Our group was called The Body of Christ. It was awesome. Wendy: Your Triple Threat CD project- Where did it come from? Sharon: It was just something that I felt I was supposed to do. It was encouraged by my late Mother Annie, who would always say, "Sharon, you have to make a record. You need to make a record." I've been blessed to sing with some of the best of the best. At this stage of my life, I wasn't really sure that this was something that could possibly happen. I'm married. I have a son. In addition, I worked a full time job, and took care of my Mother in her old age. There wasn't a lot of time to do other stuff other than sing- basically locally. Wendy: What changed? Sharon: My Mom died. When she passed away, I knew that a part of me was gone. I knew that this was something she desired of me. Unfortunately, she never got to see the completion of it to this level but she came to hear me sing many many times. She was my #1 fan and very supportive. Wendy: This is a very special project. Sharon: Yes. In addition, I wanted to leave something in the earth- something that people could put their hands on. More than a memory- something that could be beamed up (with today's technology) at any time. Something that when I am gone, I can still be found here. A memory is good, but putting your hands on something tangible that captures the passion and anointing that God has placed on my life... This allows me to leave something in the earth when I am gone. Wendy: Rumor has it that when Ervin "Magic" and Cookie Johnson were married years ago, they didn't want anyone but you to sing at their wedding. Sharon: I was blessed to sing at Mr. & Mrs. Johnson's wedding. They could have had anyone on the face of the planet and they asked me to come. I'll never forget that and I'll be grateful as it kind of increased awareness of what I could do based on the fact that they could have had anyone and they chose me. Wendy: When you're on stage, you seem to give your all. What do you think about while you're up there? Sharon: When I'm on stage, my focus is tuning into God in order to give the people what they need. I think people need to hear sincerity. I don't think people need to be entertained and I don't really enjoy entertaining. When I sing, I have to sing with purpose. I have to present something from the Father to the people. I feel like I'm standing in a capacity to be used by God to reach somebody, to give hope, to give peace- to give them something they can hold on to.