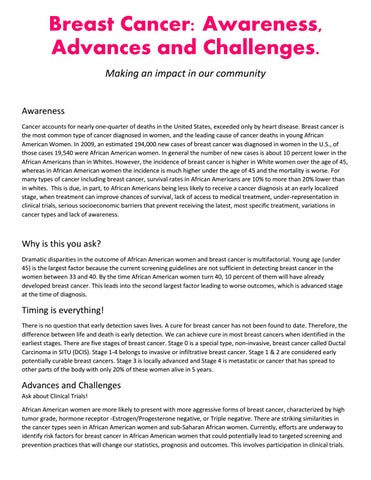 Breast Cancer: Awareness, Advances and Challenges. Making an impact in our community Awareness Cancer accounts for nearly one-quarter of deaths in the United States, exceeded only by heart disease. Breast cancer is the most common type of cancer diagnosed in women, and the leading cause of cancer deaths in young African American Women. In 2009, an estimated 194,000 new cases of breast cancer was diagnosed in women in the U.S., of those cases 19,540 were African American women. In general the number of new cases is about 10 percent lower in the African Americans than in Whites. However, the incidence of breast cancer is higher in White women over the age of 45, whereas in African American women the incidence is much higher under the age of 45 and the mortality is worse. For many types of cancer including breast cancer, survival rates in African Americans are 10% to more than 20% lower than in whites. This is due, in part, to African Americans being less likely to receive a cancer diagnosis at an early localized stage, when treatment can improve chances of survival, lack of access to medical treatment, under-representation in clinical trials, serious socioeconomic barriers that prevent receiving the latest, most specific treatment, variations in cancer types and lack of awareness.

Why is this you ask? Dramatic disparities in the outcome of African American women and breast cancer is multifactorial. Young age (under 45) is the largest factor because the current screening guidelines are not sufficient in detecting breast cancer in the women between 33 and 40. By the time African American women turn 40, 10 percent of them will have already developed breast cancer. This leads into the second largest factor leading to worse outcomes, which is advanced stage at the time of diagnosis.

Timing is everything! There is no question that early detection saves lives. A cure for breast cancer has not been found to date. Therefore, the difference between life and death is early detection. We can achieve cure in most breast cancers when identified in the earliest stages. There are five stages of breast cancer. Stage 0 is a special type, non-invasive, breast cancer called Ductal Carcinoma in SITU (DCIS). Stage 1-4 belongs to invasive or infiltrative breast cancer. Stage 1 & 2 are considered early potentially curable breast cancers. Stage 3 is locally advanced and Stage 4 is metastatic or cancer that has spread to other parts of the body with only 20% of these women alive in 5 years.