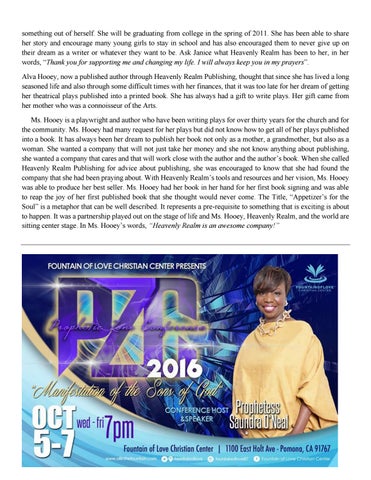 something out of herself. She will be graduating from college in the spring of 2011. She has been able to share her story and encourage many young girls to stay in school and has also encouraged them to never give up on their dream as a writer or whatever they want to be. Ask Janice what Heavenly Realm has been to her, in her words, “Thank you for supporting me and changing my life. I will always keep you in my prayers”. Alva Hooey, now a published author through Heavenly Realm Publishing, thought that since she has lived a long seasoned life and also through some difficult times with her finances, that it was too late for her dream of getting her theatrical plays published into a printed book. She has always had a gift to write plays. Her gift came from her mother who was a connoisseur of the Arts. Ms. Hooey is a playwright and author who have been writing plays for over thirty years for the church and for the community. Ms. Hooey had many request for her plays but did not know how to get all of her plays published into a book. It has always been her dream to publish her book not only as a mother, a grandmother, but also as a woman. She wanted a company that will not just take her money and she not know anything about publishing, she wanted a company that cares and that will work close with the author and the author’s book. When she called Heavenly Realm Publishing for advice about publishing, she was encouraged to know that she had found the company that she had been praying about. With Heavenly Realm’s tools and resources and her vision, Ms. Hooey was able to produce her best seller. Ms. Hooey had her book in her hand for her first book signing and was able to reap the joy of her first published book that she thought would never come. The Title, “Appetizer’s for the Soul” is a metaphor that can be well described. It represents a pre-requisite to something that is exciting is about to happen. It was a partnership played out on the stage of life and Ms. Hooey, Heavenly Realm, and the world are sitting center stage. In Ms. Hooey’s words, “Heavenly Realm is an awesome company!”