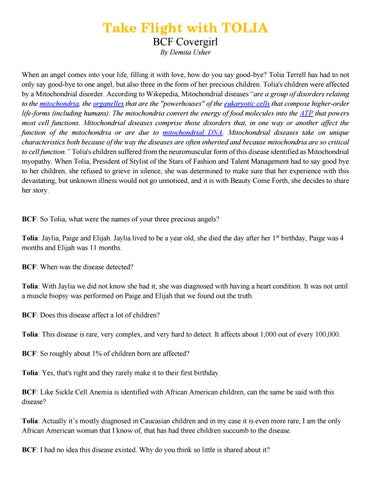 Take Flight with TOLIA BCF Covergirl By Demita Usher When an angel comes into your life, filling it with love, how do you say good-bye? Tolia Terrell has had to not only say good-bye to one angel, but also three in the form of her precious children. Tolia's children were affected by a Mitochondrial disorder. According to Wikepedia, Mitochondrial diseases “are a group of disorders relating to the mitochondria, the organelles that are the "powerhouses" of the eukaryotic cells that compose higher-order life-forms (including humans). The mitochondria convert the energy of food molecules into the ATP that powers most cell functions. Mitochondrial diseases comprise those disorders that, in one way or another affect the function of the mitochondria or are due to mitochondrial DNA. Mitochondrial diseases take on unique characteristics both because of the way the diseases are often inherited and because mitochondria are so critical to cell function.” Tolia's children suffered from the neuromuscular form of this disease identified as Mitochondrial myopathy. When Tolia, President of Stylist of the Stars of Fashion and Talent Management had to say good bye to her children, she refused to grieve in silence, she was determined to make sure that her experience with this devastating, but unknown illness would not go unnoticed, and it is with Beauty Come Forth, she decides to share her story.

BCF: So Tolia, what were the names of your three precious angels? Tolia: Jaylia, Paige and Elijah. Jaylia lived to be a year old, she died the day after her 1st birthday, Paige was 4 months and Elijah was 11 months. BCF: When was the disease detected? Tolia: With Jaylia we did not know she had it; she was diagnosed with having a heart condition. It was not until a muscle biopsy was performed on Paige and Elijah that we found out the truth. BCF: Does this disease affect a lot of children? Tolia: This disease is rare, very complex, and very hard to detect. It affects about 1,000 out of every 100,000. BCF: So roughly about 1% of children born are affected? Tolia: Yes, that's right and they rarely make it to their first birthday. BCF: Like Sickle Cell Anemia is identified with African American children, can the same be said with this disease? Tolia: Actually it’s mostly diagnosed in Caucasian children and in my case it is even more rare, I am the only African American woman that I know of, that has had three children succumb to the disease. BCF: I had no idea this disease existed. Why do you think so little is shared about it?