Architect and Urbanist graduated in July 2018

Bachelor in Architecture and Urbanism

LIVING SPACES IN THE CONTEMPORARY CITY June 2018 Subject: Undergraduate Final Project Advisor: Valter Caldana This final project was conceived with the goal of developing a research regarding the living spaces end its configurations in the midst of the acceleration and volatility scenarios that are inherent to the contemporary city. In parallel with the theoretical speculations, an architectural project was also developed, with the intention of generating some illustrations on how we can intervene on the current scenario and create living spaces that enables moments of pause, interaction and exchange among all the public, private, collective and individual spaces.

The first phase of the consisted

among the public scale

street. It had the inte

it characteristics that al

citizens to be welcome in m

of pause, that way enc

their engagement with t

context and its social dyn

INTERVENTION AT A MICRO SCALE - THE BUILDING

SITE PLAN INTERVENTION AT A MACRO SCALE - THE STREET

THE LIVING SPACES IN THE STREET AND THEIR DIFFERENT APPROPRIATION POSSIBILITIES

INTERACTION WITH THE EXISTING PRIVATE PROGRAMS SUCH AS CAFES AND BARS.

ALL THE DIFFERENT POSSIBLE ACTIVITIES INTEGRATED.

THE BUILDINGS The second phase of the

project was focused on an intervention regarding the

was developed with the intention of investigating the living spaces not only on the public scale of the street, but also among the private spaces of the buildings.

OVERALL PERSPECTIVE OF THE PROJECT

GUIDELINE FOR EACH BUILDING 1

- DISASSEMBLY OF THE GROUND FLOOR

OF THE BUILDING AND DISASSEMBLY OF THE GROUND FLOOR. 6

- DISASSEMBLY OF THE GROUND FLOOR

INTERVENTION GUIDELINES FOR THE SITE

Investigation of the different ways of acting on the consolidated territory, and the establishment of specific guidelines for each building that would undergo an intervention.

DIFFERENTIATED METAL CASEMENT WAS APPLIED AT THE OFFICE SPACES, WHICH CONFERS IDENTITY TO THE PROGRAMS ON THE FACADE.

TWO UNITS CONNECTED AND USED AS AN OFFICE SPACE.

EXISTING CONCRETE STRUCTURE OF THE BUILDING.

1° place The proposal for Blumenau’s Biergarten had as a guiding concept the idea of creating a public pocket park that takes into consideration the specificities of the context, and therefore fosters a greater identification from the citizens and users. To achieve that, the main reference for the development of the project was the german culture that has a strong presence in the region since the foundation of the city. A place that allows the gathering of different publics, the Biergarten was conceived to promote the [re]union of the citizens with the cultural roots that gave birth to the city. Team: Caroline Almeida Souza | Guilherme Wemura Palma | Natália Krislee Seixas Papa.

We conceived the space for the Biergarten as a new possibility of appropriation for the city, more than a place for drinking, a place that is also a support for the cityâ&#x20AC;&#x2122;s biggest cultural asset: the beer. Based on cultural, landscape and environmental concepts, the project provides to the city a pleasant space integrated with nature, a new type of leisure and consumption space for Blumenau.

Influence of the german

culture on the development

elements used by the

of the project, and the

that, which is one of the

main cultural assets of the

principles with the actual context and reality of the site.

incorporated in the project

such as the rainwater

creation of a shaded and

possible through use of a

promotes the interaction between different users.

My OWN BREIF OBJECT December 2019 Subject: Furniture and Product Design Advisor: Roger Arquer Dilla Luis Eslava Aloy A low stool hypothetically designed for the Italian company “Mattiazzi” known for having a “healthy obsession for woodworking”. The project was developed while having in mind the concepts of multifunctionality and movability as a response to the contemporary and dynamic reality that we currently live in. While answering to those principles, the design also sought to convey an aesthetically recognisable object; an informal design that opens itself to different appropriations by the user, but that is also uncompromising and conveys a strong and reliable feel.

SECOND OPPORTUNITY OBJECT December 2019 Subject: Furniture and Product Design Advisor: Roger Arquer Dilla Luis Eslava Aloy The challenge proposed by the subject was to purchase a second hand object at a local flea market, and offer it a second opportunity; a second chance through an intervention. The result that came out of the challenge was the merge of different objects into the creation of a new one. The combination of parts of the original camera with its case creating a unique accessory piece. The case it self carried a great appealing design, so the idea was to keep that as the main object, while adding new parts to it with the intention of highlighting the original function, and bring back the user to the memory what that object once was.

My OWN CHAIR OBJECT December 2019 Subject: Furniture and Product Design Advisor: Roger Arquer Dilla Luis Eslava Aloy Starting from an IKEA chair the assignment consisted on creating a new chair using all or some parts of the original one. The object designed revolved around the concept of shadow and the tipping point before you fall into it. Therefore the project consisted on the addition of a new chair as a mirrored shadow of the original one. The extra piece was attached at tipping point, or the biggest angle shift before the chair pulled back, being this was on the edge of the equilibrium. Team: Casey Smith

NURSERY AND KINDERGARTEN July 2017 Competition: CBCA -10th Ed. Finalist The project is located in Jardim São Francisco, eastern São Paulo, a neighbourhood occupied by a low-income population with approximately 400 children waiting in line for a place at a public daycare. The program is organised around a central courtyard, an open area with a playground and small slopes encouraging the kids to play. The program was also arranged while thinking of the best thermal conditions in order to provide maximum comfort and efficiency, and the overall volume of the project was also designed while establishing a connection with the structure elements. The use of a colourful palette was a key point of the project and was applied thought out the overall composition with the intention of stimulate the creativity and a healthy growth for the kids. Team: Guilherme Wemura Palma | Matheus Oliveira | Natália Krislee Seixas Papa.

1. The program was arranged around the courtya account the acknowledgement of the importance of a in an educational environment.

3. Taking into consideration the thermal comfort of

the facades and the volume itself were arranged to t advantage of the solar incidence on the different s project.

ard, taking into a central space

the building, take the most spaces of the

2. Taking into consideration the thermal comfort of the building, the facades and the volume itself were arranged to take the most advantage of the solar incidence on the different spaces of the project.

4. Taking advantage of the possibilities that the steel structure

allows, the space on the upper floor in-between the classrooms and the garden was stablished as a modular and semi-covered outdoor space that also establishes the basis of a structure for the possibly needed expansions in the future.

Image - for “Sabella Arquitetura” while working as an architect for the firm.

Series of photographs captured in New York City and presented as the final project for a photo practice course I took at Parsons Institute for Design. The main intention of the project was to capture New Yorkâ&#x20AC;&#x2122;s architecture from a graphic and abstract perspective, highlighting some aspects such as form, light and texture. All photos are here presented without any correction or postproduction process. 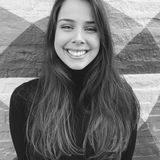