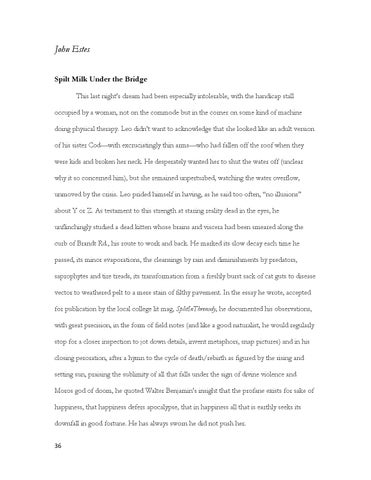 John Estes Spilt Milk Under the Bridge This last night’s dream had been especially intolerable, with the handicap stall occupied by a woman, not on the commode but in the corner on some kind of machine doing physical therapy. Leo didn’t want to acknowledge that she looked like an adult version of his sister Cod—with excruciatingly thin arms—who had fallen off the roof when they were kids and broken her neck. He desperately wanted her to shut the water off (unclear why it so concerned him), but she remained unperturbed, watching the water overflow, unmoved by the crisis. Leo prided himself in having, as he said too often, “no illusions” about Y or Z. As testament to this strength at staring reality dead in the eyes, he unflinchingly studied a dead kitten whose brains and viscera had been smeared along the curb of Brandt Rd., his route to work and back. He marked its slow decay each time he passed, its minor evaporations, the cleansings by rain and diminishments by predators, saprophytes and tire treads, its transformation from a freshly burst sack of cat guts to disease vector to weathered pelt to a mere stain of filthy pavement. In the essay he wrote, accepted for publication by the local college lit mag, SplitInThrenody, he documented his observations, with great precision, in the form of field notes (and like a good naturalist, he would regularly stop for a closer inspection to jot down details, invent metaphors, snap pictures) and in his closing peroration, after a hymn to the cycle of death/rebirth as figured by the rising and setting sun, praising the sublimity of all that falls under the sign of divine violence and Moros god of doom, he quoted Walter Benjamin’s insight that the profane exists for sake of happiness, that happiness defers apocalypse, that in happiness all that is earthly seeks its downfall in good fortune. He has always sworn he did not push her. 36