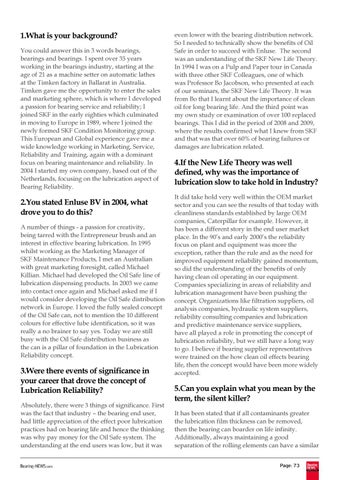 1. What is your background? You could answer this in 3 words bearings, bearings and bearings. I spent over 35 years working in the bearings industry, starting at the age of 21 as a machine setter on automatic lathes at the Timken factory in Ballarat in Australia. Timken gave me the opportunity to enter the sales and marketing sphere, which is where I developed a passion for bearing service and reliability; I joined SKF in the early eighties which culminated in moving to Europe in 1989, where I joined the newly formed SKF Condition Monitoring group. This European and Global experience gave me a wide knowledge working in Marketing, Service, Reliability and Training, again with a dominant focus on bearing maintenance and reliability. In 2004 I started my own company, based out of the Netherlands, focusing on the lubrication aspect of Bearing Reliability.

2. You stated Enluse BV in 2004, what drove you to do this? A number of things - a passion for creativity, being tarred with the Entrepreneur brush and an interest in effective bearing lubrication. In 1995 whilst working as the Marketing Manager of SKF Maintenance Products, I met an Australian with great marketing foresight, called Michael Killian. Michael had developed the Oil Safe line of lubrication dispensing products. In 2003 we came into contact once again and Michael asked me if I would consider developing the Oil Safe distribution network in Europe. I loved the fully sealed concept of the Oil Safe can, not to mention the 10 different colours for effective lube identification, so it was really a no brainer to say yes. Today we are still busy with the Oil Safe distribution business as the can is a pillar of foundation in the Lubrication Reliability concept.

3. Were there events of significance in your career that drove the concept of Lubrication Reliability? Absolutely, there were 3 things of significance. First was the fact that industry â&#x20AC;&#x201C; the bearing end user, had little appreciation of the effect poor lubrication practices had on bearing life and hence the thinking was why pay money for the Oil Safe system. The understanding at the end users was low, but it was

even lower with the bearing distribution network. So I needed to technically show the benefits of Oil Safe in order to succeed with Enluse. The second was an understanding of the SKF New Life Theory. In 1994 I was on a Pulp and Paper tour in Canada with three other SKF Colleagues, one of which was Professor Bo Jacobson, who presented at each of our seminars, the SKF New Life Theory. It was from Bo that I learnt about the importance of clean oil for long bearing life. And the third point was my own study or examination of over 100 replaced bearings. This I did in the period of 2008 and 2009, where the results confirmed what I knew from SKF and that was that over 60% of bearing failures or damages are lubrication related.

4. If the New Life Theory was well defined, why was the importance of lubrication slow to take hold in Industry? It did take hold very well within the OEM market sector and you can see the results of that today with cleanliness standards established by large OEM companies, Caterpillar for example. However, it has been a different story in the end user market place. In the 90â&#x20AC;&#x2122;s and early 2000â&#x20AC;&#x2122;s the reliability focus on plant and equipment was more the exception, rather than the rule and as the need for improved equipment reliability gained momentum, so did the understanding of the benefits of only having clean oil operating in our equipment. Companies specializing in areas of reliability and lubrication management have been pushing the concept. Organizations like filtration suppliers, oil analysis companies, hydraulic system suppliers, reliability consulting companies and lubrication and predictive maintenance service suppliers, have all played a role in promoting the concept of lubrication reliability, but we still have a long way to go. I believe if bearing supplier representatives were trained on the how clean oil effects bearing life, then the concept would have been more widely accepted.

5. Can you explain what you mean by the term, the silent killer? It has been stated that if all contaminants greater the lubrication film thickness can be removed, then the bearing can boarder on life infinity. Additionally, always maintaining a good separation of the rolling elements can have a similar Page: 73