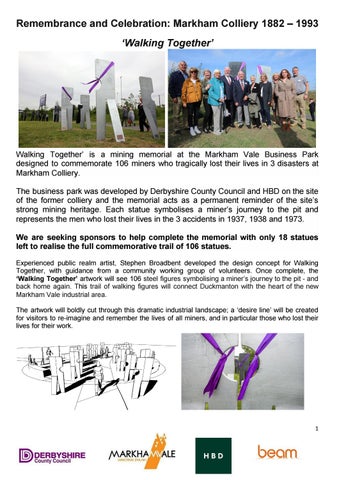 Walking Together’ is a mining memorial at the Markham Vale Business Park designed to commemorate 106 miners who tragically lost their lives in 3 disasters at Markham Colliery. The business park was developed by Derbyshire County Council and HBD on the site of the former colliery and the memorial acts as a permanent reminder of the site’s strong mining heritage. Each statue symbolises a miner’s journey to the pit and represents the men who lost their lives in the 3 accidents in 1937, 1938 and 1973. We are seeking sponsors to help complete the memorial with only 18 statues left to realise the full commemorative trail of 106 statues. Experienced public realm artist, Stephen Broadbent developed the design concept for Walking Together, with guidance from a community working group of volunteers. Once complete, the ‘Walking Together’ artwork will see 106 steel figures symbolising a miner’s journey to the pit - and back home again. This ​trail of walking figures will connect Duckmanton with the heart of the new Markham Vale industrial area. The artwork will boldly cut through this dramatic industrial landscape; a ‘desire line’ will be created for visitors to re-imagine and remember the lives of all miners, and in particular those who lost their lives for their work.

Images of the commemoration service held at Markham on 30th July 2013 to mark the 40th anniversary of the 1973 disaster. At this event the first two ‘Walking Together’ figures with the ‘pit checks’ of the youngest and oldest miners killed in the disasters were unveiled. The youngest miner was 18-year-old Arthur Brown, a pony driver killed in the 1938 disaster. The oldest was Albert Tyler, a 64-year-old back repairer who died in the 1973 disaster.

Walking Together – in detail This walking trail of figures symbolises a miner’s journey to the pit and back home again. The 53 figures walking home after a shift underground will have a darker finish on the steel, compared to the 53 brighter figures walking to the pit to start a shift. Each of these figures has fixed on his chest a circular bronze miner’s tag. On the underside is stamped the name of a miner killed, his age and job title. On the front of the tag is stamped the name and year of the disaster, encouraging the visitor to touch the very personal and tactile tags, and turn it over to discover the name, age and occupation. We work closely with the Markham Vale Heritage Group to research each of the miners and seek to engage with relatives and friends to engage them with the memorial and associated unveiling events. Historically, there were many routes to Markham Colliery from many different communities, but the route of the ‘Walking Together’ artwork, and which we hope will symbolise all of these routes, connects Duckmanton through the motorway underpass, to the Markham Vale Environment Centre. The route was developed by Stephen Broadbent under guidance from a group of former miners and pupils from nearby schools. Along this route, clusters of figures will help establish new landscaped areas, with associated planting and seating, creating an enhanced ‘sense of place’ for workers, for the local community and for visitors. These special areas will also allow for personal reflection, and greater interpretation of the site’s history. At other areas along the trail, the figures will serve as way-finders and markers.

“Markham’s three significant mining disasters must be remembered, but it quickly becomes clear that we must not forget the many other tragic mining deaths and significant injuries, and indeed the remarkable sacrifice all miners made to help build this nation’s prosperity. We believe the memorial also needs to convey a sense of celebration; of an important job well done; of a unique time and place; and a community’s spirit and resilience.” Stephen Broadbent, Artist.

â&amp;#x20AC;&amp;#x153;I think it is vital to have a memorial for the miners otherwise future generations will never know about them.â&amp;#x20AC;? Sandra Struggles, Volunteer

The Story Mine - ​a digital archive A key part of the ‘Walking Together’ project is the development of a website which acts as a space to document the stories behind each of the men represented by the figures and to share stories of the wider mining heritage of Markham, helping to keep these memories alive for future generations. www.markhamstorymine.org The Artist - Broadbent Studio Broadbent is a studio of artists, designers and makers built around the experience and expertise of artist Stephen Broadbent. Stephen has been completing work in the public realm for over 25 years and is now valued as an artist, consultant and international speaker. His work has ranged from simple sculptural elements to overseeing extensive regeneration schemes and community projects. ​www.sbal.co.uk About Markham Vale Markham Vale is home to one of the UK’s premier business and industrial park and is one of the UK’s leading logistics locations. The site will bring 4,100 new jobs to the area and £130 million of private investment. The development is centered around the former Markham Colliery and is a significant public-private sector partnership between Derbyshire County Council and Henry Boot Developments Ltd. Regeneration at Markham is underpinned by a philosophy of sustainability, accessibility and quality. www.markhamvale.co.uk