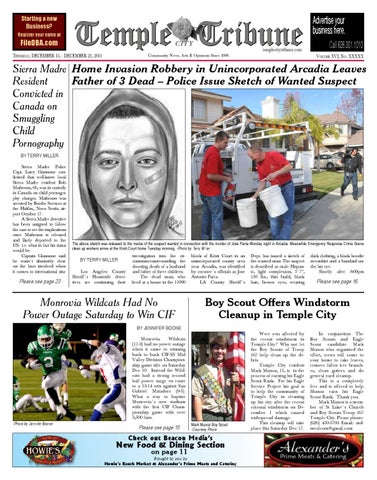 Register your name at

Sierra Madre Home Invasion Robbery in Unincorporated Arcadia Leaves Father of 3 Dead – Police Issue Sketch of Wanted Suspect Resident Convicted in Canada on Smuggling Child Pornography By Terry Miller Sierra Madre Police Capt. Larry Giannone confirmed that well-know local Sierra Madre resident Bob Matheson, 66, was in custody in Canada on child pornography charges. Matheson was arrested by Border Services at the Halifax, Nova Scotia airport October 17. A Sierra Madre detective has been assigned to follow the case to see the implications once Matheson is released and likely deported to the US: i.e. what in fact his status would be. Captain Giannone said he wasn’t absolutely clear on the laws involved when it comes to international situ-

The above sketch was released to the media of the suspect wanted in connection with the murder of Jose Parra Monday night in Arcadia. Meanwhile Emergency Response Crime Scene clean up workers arrive at the Kristi Court home Tuesday morning. -Photo by Terry Miller

investigation into the circumstancessurrounding the shooting death of a husband and father of three children. The dead man, who lived at a house in the 11000

Monrovia Wildcats Had No Power Outage Saturday to Win CIF

block of Kristi Court in an unincorporated county area near Arcadia, was identified by coroner’s officials as Jose Antonio Parra. LA County Sheriff’s

Monrovia Wildcats (11-3) had no power outage when it came to winning back to back CIF-SS Mid Valley Division Championship game title on Saturday Dec 10. Instead the Wildcats had a strong second half power surge en route to a 53-14 win against San Gabriel Matadors (9-5). What a way to baptize Monrovia’s new stadium with the first CIF Championship game with over 3,500 fans.

dark clothing, a black hoodie sweatshirt and a bandaid under his eye. Shortly after 8:00pm

Brought to you by Howie’s Ranch Market &amp; Alexander’s Prime Meats and Catering

Were you affected by the recent windstorm in Temple City? Why not let the Boy Scouts of Troop 167 help clean up the debris. Temple City resident Mark Munoz, 15, is in the process of earning his Eagle Scout Rank. For his Eagle Service Project his goal is to help the community of Temple City in cleaning up his city after the recent colossal windstorm on December 1 which caused widespread damage. This cleanup will take place this Saturday Dec 17.

In conjunction The Boy Scouts and Eagle Scout candidate Mark Munoz who organized the effort, crews will come to your home to rake leaves, remove fallen tree branches, clean gutters and do general yard cleanup. This is a completely free and is offered to help Munoz earn his Eagle Scout Rank. Thank you. Mark Munoz is a member of St Luke’s Church and Boy Scouts Troop 167 Temple City. Please phone: (626) 450-5793 Email: mdmvolcom@gmail.com