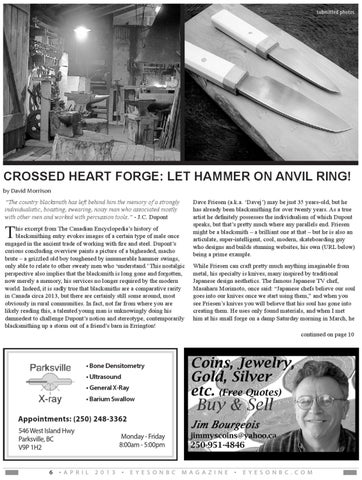 CROSSED HEART FORGE: LET HAMMER ON ANVIL RING! by David Morrison “The country blacksmith has left behind him the memory of a strongly individualistic, boasting, swearing, noisy man who associated mostly with other men and worked with percussion tools.” - J.C. Dupont

his excerpt from The Canadian Encyclopedia’s history of blacksmithing entry evokes images of a certain type of male once engaged in the ancient trade of working with fire and steel. Dupont’s curious concluding overview paints a picture of a bigheaded, macho brute – a grizzled old boy toughened by innumerable hammer swings, only able to relate to other sweaty men who ‘understand.’ This nostalgic perspective also implies that the blacksmith is long gone and forgotten, now merely a memory, his services no longer required by the modern world. Indeed, it is sadly true that blacksmiths are a comparative rarity in Canada circa 2013, but there are certainly still some around, most obviously in rural communities. In fact, not far from where you are likely reading this, a talented young man is unknowingly doing his damnedest to challenge Dupont’s notion and stereotype, contemporarily blacksmithing up a storm out of a friend’s barn in Errington!

Dave Friesen (a.k.a. ‘Davej’) may be just 35 years-old, but he has already been blacksmithing for over twenty years. As a true artist he definitely possesses the individualism of which Dupont speaks, but that’s pretty much where any parallels end. Friesen might be a blacksmith – a brilliant one at that – but he is also an articulate, super-intelligent, cool, modern, skateboarding guy who designs and builds stunning websites, his own (URL below) being a prime example. While Friesen can craft pretty much anything imaginable from metal, his specialty is knives, many inspired by traditional Japanese design aesthetics. The famous Japanese TV chef, Masaharu Morimoto, once said: “Japanese chefs believe our soul goes into our knives once we start using them,” and when you see Friesen’s knives you will believe that his soul has gone into creating them. He uses only found materials, and when I met him at his small forge on a damp Saturday morning in March, he continued on page 10 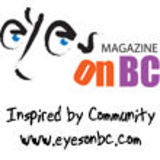