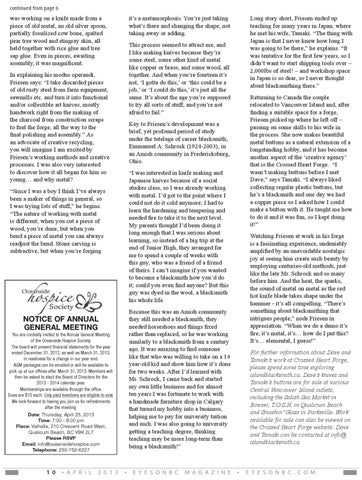 continued from page 6 was working on a knife made from a piece of old metal, an old silver spoon, partially fossilized cow bone, spalted pear tree wood and stingray skin, all held together with rice glue and tree sap glue. Even in pieces, awaiting assembly, it was magnificent.

it’s a metamorphosis. You’re just taking what’s there and changing the shape, not taking away or adding.

Long story short, Friesen ended up teaching for many years in Japan, where he met his wife, Tamaki. “The thing with Japan is that I never knew how long I was going to be there,” he explains. “It was tentative for the first few years, so I didn’t want to start shipping tools over – 2,000lbs of steel! – and workshop space in Japan is so dear, so I never thought about blacksmithing there.”

This process seemed to attract me, and I like making knives because they’re some steel, some other kind of metal like copper or brass, and some wood, all together. And when you’re fourteen it’s not, ‘I gotta do this,’ or ‘this could be a job,’ or ‘I could do this,’ it’s just all the same. It’s about the age you’re supposed to try all sorts of stuff, and you’re not afraid to fail.”

In explaining his modus operandi, Friesen says: “I take discarded pieces of old rusty steel from farm equipment, sawmills etc. and turn it into functional and/or collectible art knives, mostly handwork right from the making of the charcoal from construction scraps to fuel the forge, all the way to the final polishing and assembly.” As an advocate of creative recycling, you will imagine I am excited by Friesen’s working methods and creative processes. I was also very interested to discover how it all began for him so young… and why metal?

Returning to Canada the couple relocated to Vancouver Island and, after finding a suitable space for a forge, Friesen picked up where he left off – passing on some skills to his wife in the process. She now makes beautiful metal buttons as a natural extension of a longstanding hobby, and it has become another aspect of the ‘creative agency’ that is the Crossed Heart Forge. “I wasn’t making buttons before I met Dave,” says Tamaki. “I always liked collecting regular plastic buttons, but he’s a blacksmith and one day we had a copper piece so I asked how I could make a button with it. He taught me how to do it and it was fun, so I kept doing it!”

Key to Friesen’s development was a brief, yet profound period of study under the tutelage of career blacksmith, Emmanuel A. Schrock (1924-2003), in an Amish community in Fredericksburg, Ohio. “I was interested in knife making and Japanese knives because of a social studies class, so I was already working with metal. I’d got to the point where I could not do it cold anymore; I had to learn the hardening and tempering and needed fire to take it to the next level. My parents thought I’d been doing it long enough that I was serious about learning, so instead of a big trip at the end of Junior High, they arranged for me to spend a couple of weeks with this guy, who was a friend of a friend of theirs. I can’t imagine if you wanted to become a blacksmith how you’d do it; could you even find anyone? But this guy was dyed in the wool, a blacksmith his whole life.

“Since I was a boy I think I’ve always been a maker of things in general, so I was trying lots of stuff,” he begins. “The nature of working with metal is different; when you cut a piece of wood, you’re done, but when you bend a piece of metal you can always readjust the bend. Stone carving is subtractive, but when you’re forging

Watching Friesen at work in his forge is a fascinating experience, undeniably amplified by an unavoidable nostalgic joy at seeing him create such beauty by employing centuries-old methods, just like the late Mr. Schrock and so many before him. And the heat, the sparks, the sound of metal on metal as the red hot knife blade takes shape under the hammer - it’s all compelling. “There’s something about blacksmithing that intrigues people,” nods Friesen in appreciation. “When we do a demo it’s fire, it’s metal, it’s… how do I put this? It’s… elemental, I guess!”

Because this was an Amish community they still needed a blacksmith, they needed horseshoes and things fixed rather than replaced, so he was working similarly to a blacksmith from a century ago. It was amazing to find someone like that who was willing to take on a 14 year-old kid and show him how it’s done for two weeks. After I’d learned with Mr. Schrock, I came back and started my own little business and for almost ten years I was fortunate to work with a handmade furniture shop in Calgary that turned my hobby into a business, helping me to pay for university tuition and such. I was also going to university getting a teaching degree, thinking teaching may be more long-term than being a blacksmith!”

For further information about Dave and Tamaki’s work at Crossed Heart Forge, please spend some time exploring islandblacksmith.ca. Dave’s knives and Tamaki’s buttons are for sale at various Central Vancouver Island outlets, including the Salish Sea Market in Bowser, T.O.S.H. in Qualicum Beach and Smashin’ Glass in Parksville. Work available for sale can also be viewed on the Crossed Heart Forge website. Dave and Tamaki can be contacted at info@ islandblacksmith.ca