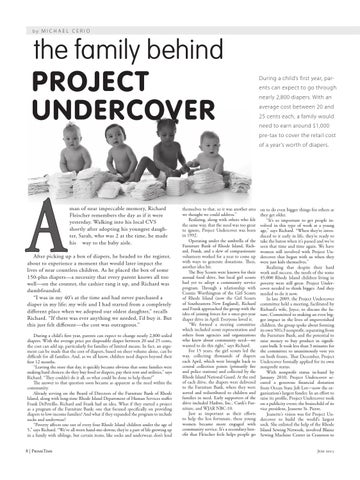 During a child’s first year, parents can expect to go through nearly 2,800 diapers. With an average cost between 20 and 25 cents each, a family would need to earn around $1,000 pre-tax to cover the retail cost of a year’s worth of diapers.

man of near impeccable memory, Richard Fleischer remembers the day as if it were yesterday. Walking into his local CVS shortly after adopting his youngest daughter, Sarah, who was 2 at the time, he made his way to the baby aisle.

After picking up a box of diapers, he headed to the register, about to experience a moment that would later impact the lives of near countless children. As he placed the box of some 150-plus diapers—a necessity that every parent knows all too well—on the counter, the cashier rang it up, and Richard was dumbfounded. “I was in my 0’s at the time and had never purchased a diaper in my life; my wife and I had started from a completely different place when we adopted our oldest daughter,” recalls Richard. “If there was ever anything we needed, I’d buy it. But this just felt different—the cost was outrageous.” During a child’s first year, parents can expect to change nearly 2,800 soiled diapers. With the average price per disposable diaper between 20 and 25 cents, the cost can add up, particularly for families of limited means. In fact, an argument can be made that the cost of diapers, based on sheer volume alone, can be difficult for all families. And, as we all know, children need diapers beyond their first 12 months. “Leaving the store that day, it quickly became obvious that some families were making hard choices; do they buy food or diapers, pay their rent and utilities,” says Richard. “They couldn’t do it all, so what could be done to help them?” The answer to that question soon became as apparent as the need within the community. Already serving on the Board of Directors of the Furniture Bank of Rhode Island, along with long-time Rhode Island Department of Human Services staffer Frank DePetrillo, Richard and Frank had an idea. What if they started a project as a program of the Furniture Bank; one that focused specifically on providing diapers to low-income families? And what if they expanded the program to include socks and underwear? “Poverty affects one out of every four Rhode Island children under the age of 5,” says Richard. “We’ve all worn hand-me-downs; they’re a part of life growing up in a family with siblings, but certain items, like socks and underwear, don’t lend 8 | PrimeTime

themselves to that, so it was another area we thought we could address.” Realizing, along with others who felt the same way, that the need was too great to ignore, Project Undercover was born in 1992. Operating under the umbrella of the Furniture Bank of Rhode Island, Richard, Frank, and a slew of compassionate volunteers worked for a year to come up with ways to generate donations. Then, another idea hit. The Boy Scouts were known for their annual food drive, but local girl scouts had yet to adopt a community service program. Through a relationship with Connie Worthington of the Girl Scouts of Rhode Island (now the Girl Scouts of Southeastern New England), Richard and Frank approached the group with the idea of joining forces for a once-per-year diaper drive in April. Everyone loved it. “We formed a steering committee which included scout representation and others from agencies and organizations who knew about community need—we wanted to do this right,” says Richard. For 15 years, the girl scouts led the way, collecting thousands of diapers each April, which were brought back to central collection points (primarily fire and police stations) and collected by the Rhode Island National Guard. At the end of each drive, the diapers were delivered to the Furniture Bank, where they were sorted and redistributed to children and families in need. Early supporters of the drive included Hasbro, Inc., Cardi’s Furniture, and WJAR NBC-10. Just as important as their efforts to help the less fortunate, these young women became more engaged with community service. It’s a secondary benefit that Fleischer feels helps people go

on to do even bigger things for others as they get older. “It’s so important to get people involved in this type of work at a young age,” says Richard. “When they’re introduced to it early in life, they’re ready to take the baton when it’s passed and we’ve seen that time and time again. We have women still involved with Project Undercover that began with us when they were just kids themselves.” Realizing that despite their hard work and success, the needs of the some 5,000 Rhode Island children living in poverty were still great. Project Undercover needed to think bigger. And they needed to do it now. In late 2009, the Project Undercover committee held a meeting, facilitated by Richard’s wife, Joyce, to discuss the future. Committed to making an even bigger impact in the lives of impoverished children, the group spoke about forming its own 501c3 nonprofit, separating from the Furniture Bank, and the potential to raise money to buy product in significant bulk. It took less than 3 minutes for the committee to unanimously vote yes on both fronts. That December, Project Undercover formally applied for its own nonprofit status. With nonprofit status in-hand by January 2010, Project Undercover secured a generous financial donation from Ocean State Job Lot—now the organization’s largest funder. In an effort to raise its profile, Project Undercover took on a publicity event; the brainchild of its vice president, Jeanette St. Pierre. Jeanette’s vision was for Project Undercover to build the world’s largest sock. She enlisted the help of the Rhode Island Sewing Network, involved Blaine Sewing Machine Center in Cranston to July 2015 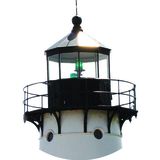