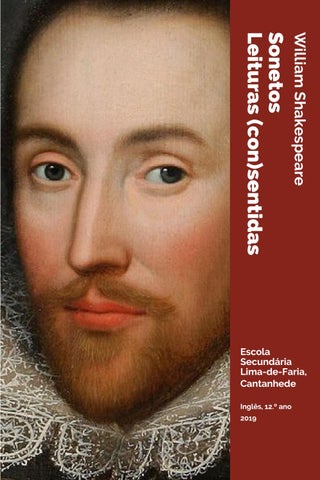 The students were asked to look for William Shakespeareâ&amp;#x20AC;&amp;#x2122;s biography, the sonnets and their translation into Portuguese. In which regards their syllabus, they had to find out words that are no longer used and find the message of the poem. In the class, students were given the opportunity to listen to the recitation of the poems. Ana Costa e Silva

Sonnet 1 stands out because of its masterful structure and language, not to mention the complex use of metaphor and motif.Â All in all, it focuses on the importance of having children and preserving beauty&#39;s truth, the rose. The young man concentrates on his narcissistic ways and how he eats up his own energy and is his own worst enemy. It implies that it would be selfish not to propagate such beauty and the world should have its beauty in the form of children. It tells us to not self-consume and to not end up eaten by the all-consuming grave. AndrĂŠ Neves Bernardo Mesquita Laura Cruz Rodrigo Abrantes

Sonnet 1 From fairest creatures we desire increase, That thereby beauty’s rose might never die, But as the riper should by time decease, His tender heir might bear his memory: But thou, contracted to thine own bright eyes, Feed’st thy light’st flame with self-substantial fuel, Making a famine where abundance lies, Thyself thy foe, to thy sweet self too cruel. Thou that art now the world’s fresh ornament And only herald to the gaudy spring, Within thine own bud buriest thy content And, tender churl, makest waste in niggarding. Pity the world, or else this glutton be, To eat the world’s due, by the grave and thee.

The speaker begins by asking whether he should or will compare &quot;thee&quot; to a summer day. He says that his beloved is more lovely and more temperate. He then runs off a list of reasons why summer isn’t all that great: winds shake the buds that emerged in spring, summer ends too quickly and the sun can get too hot or be obscured by clouds. He goes on, saying that everything beautiful eventually fades by chance or by nature’s inevitable changes. Coming back to the beloved, though, he argues that her summer (or happy, beautiful years) won’t go away, nor will her beauty fade away. Moreover, death will never be able to take the beloved, since the beloved exists in eternal lines (meaning poetry). The speaker concludes that as long as humans exist and can see (so as to read), the poem he’s writing will live on, allowing the beloved to keep living as well. Beatriz Oliveira Bárbara Silva Teresa Libório

Sonnet 18 Shall I compare thee to a summer&#39;s day? Thou art more lovely and more temperate: Rough winds do shake the darling buds of May, And summer&#39;s lease hath all too short a date: Sometime too hot the eye of heaven shines, And often is his gold complexion dimm&#39;d; And every fair from fair sometime declines, By chance, or nature&#39;s changing course, untrimm&#39;d; But thy eternal summer shall not fade Nor lose possession of that fair thou ow&#39;st; Nor shall Death brag thou wander&#39;st in his shade, When in eternal lines to time thou grow&#39;st; So long as men can breathe or eyes can see, So long lives this, and this gives life to thee.

This sonnet was written because of love and has a lot of implied feelings (“You live in this, and dwell in lover&#39;s eyes.”) but also talks about death (“That wear this world out to the ending doom.”). In the first four lines Shakespeare talks about an unlike fine stone and monuments, the sonnet itself will be love’s timeless vehicle. It also introduces the idea that war and

Sonnet 55 Not marble, nor the gilded monuments Of princes, shall outlive this powerful rhyme; But you shall shine more bright in these contents Than unswept stone besmear&#39;d with sluttish time. When wasteful war shall statues overturn, And broils root out the work of masonry, Nor Mars his sword nor war&#39;s quick fire shall burn The living record of your memory. &#39;Gainst death and all-oblivious enmity Shall you pace forth; your praise shall still find room Even in the eyes of all posterity That wear this world out to the ending doom. So, till the judgment that yourself arise, You live in this, and dwell in lover&#39;s eyes.

stronger than everything else. William Shakespeare uses Winter, night and fire as metaphors for the inevitable arrival of death. This sonnet conveys the idea that, for now, old age and death seems very distant but, when we think about it, we will take better advantage of what we have now and then we will understand what William felt when he was writing this sonnet. Beatriz Caetano David Moita Francisca Carvalho Rodrigo Ferreira

Sonnet 73 That time of year thou mayst in me behold When yellow leaves, or none, or few, do hang Upon those boughs which shake against the cold, Bare ruin&#39;d choirs, where late the sweet birds sang. In me thou see&#39;st the twilight of such day As after sunset fadeth in the west, Which by and by black night doth take away, Death&#39;s second self, that seals up all in rest. In me thou see&#39;st the glowing of such fire That on the ashes of his youth doth lie, As the death-bed whereon it must expire, Consum&#39;d with that which it was nourish&#39;d by. This thou perceiv&#39;st, which makes thy love more strong, To love that well which thou must leave ere long.

The poet begins the poem saying that one should not oppose the &quot;marriage of true minds,&quot; and that love can not be true if something changes for any reason; true love

difficulties. In the seventh line, the poet makes a nautical reference, comparing love with the north star, guiding the sailors. Nor should love disappear with time; instead, true love is, like the polar star, &quot;always fixed&quot; and lasts forever. The sonnet 116, with

redefines its theme to each verse, and the subject becomes increasingly vulnerable. It begins as motionless and distant, remote, independently evolving to be less remote, more tangible and grounded. The final two lines bring a sense of &quot;returning to earth&quot;. Ideal love deteriorates in any sonnet. Ana Bacelar Ana Oliveira Ana Silva

Sonnet 116 Let me not to the marriage of true minds Admit impediments. Love is not love Which alters when it alteration finds, Or bends with the remover to remove. O no! It is an ever-fixed mark That looks on tempests and is never shaken; It is the star to every wand&#39;ring bark, Whose worth&#39;s unknown, although his height be taken. Love&#39;s not Time&#39;s fool, though rosy lips and cheeks Within his bending sickle&#39;s compass come; Love alters not with his brief hours and weeks, But bears it out even to the edge of doom. If this be error and upon me prov&#39;d, I never writ, nor no man ever lov&#39;d.

This sonnet wants to transmit the idea of false love. It

speaker’s lover and many other beauties, but never in the lover’s favor. He compares, for example, her eyes to the sun, her breath to the perfume and herself to goddesses. He ends the poem saying his love for her is as rare and valuable as all the false comparisons

Sonnet 130 My mistress’ eyes are nothing like the sun; Coral is far more red than her lips’ red; If snow be white, why then her breasts are dun; If hairs be wires, black wires grow on her head. I have seen roses damask’d, red and white, But no such roses see I in her cheeks; And in some perfumes is there more delight Than in the breath that from my mistress reeks. I love to hear her speak, yet well I know That music hath a far more pleasing sound; I grant I never saw a goddess go; My mistress, when she walks, treads on the ground: And yet, by heaven, I think my love as rare As any she belied with false compare.

The students were asked to look for William Shakespeare’s biography, the sonnets and their translation into Portuguese. In which regards their syllabus, they had to find out words that are no longer used and find the message of the poem. In the class, students were given the opportunity to listen to the recitation of the poems.