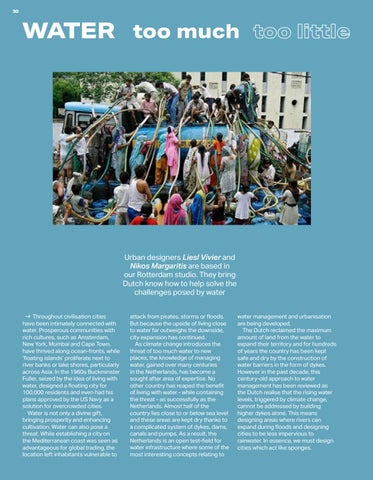 Urban designers Liesl Vivier and Nikos Margaritis are based in our Rotterdam studio. They bring Dutch know how to help solve the challenges posed by water Throughout civilisation cities have been intimately connected with water. Prosperous communities with rich cultures, such as Amsterdam, New York, Mumbai and Cape Town, have thrived along ocean-fronts, while â&#x20AC;&#x2DC;floating islandsâ&#x20AC;&#x2122; proliferate next to river banks or lake shores, particularly across Asia. In the 1960s Buckminster Fuller, seized by the idea of living with water, designed a floating city for 100,000 residents and even had his plans approved by the US Navy as a solution for overcrowded cities. Water is not only a divine gift, bringing prosperity and enhancing cultivation. Water can also pose a threat. While establishing a city on the Mediterranean coast was seen as advantageous for global trading, the location left inhabitants vulnerable to

attack from pirates, storms or floods. But because the upside of living close to water far outweighs the downside, city expansion has continued. As climate change introduces the threat of too much water to new places, the knowledge of managing water, gained over many centuries in the Netherlands, has become a sought after area of expertise. No other country has reaped the benefit of living with water - while containing the threat - as successfully as the Netherlands. Almost half of the country lies close to or below sea level and these areas are kept dry thanks to a complicated system of dykes, dams, canals and pumps. As a result, the Netherlands is an open test-field for water infrastructure where some of the most interesting concepts relating to

water management and urbanisation are being developed. The Dutch reclaimed the maximum amount of land from the water to expand their territory and for hundreds of years the country has been kept safe and dry by the construction of water barriers in the form of dykes. However in the past decade, this century-old approach to water management has been reviewed as the Dutch realise that the rising water levels, triggered by climate change, cannot be addressed by building higher dykes alone. This means designing areas where rivers can expand during floods and designing cities to be less impervious to rainwater. In essence, we must design cities which act like sponges. 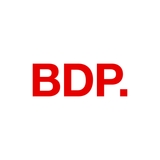