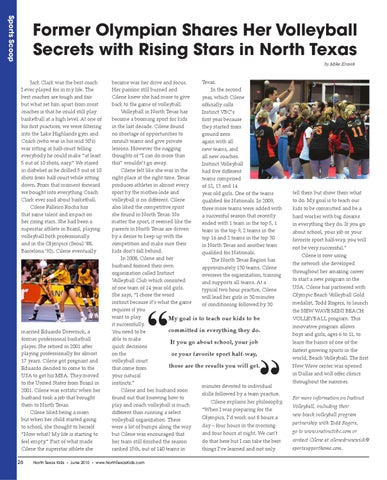 Jack Clark was the best coach I ever played for in my life. The best coaches are tough and fair but what set him apart from most coaches is that he could still play basketball at a high level. At one of his first practices, we were filtering into the Lake Highlands gym and Coach (who was in his mid 30’s) was sitting at half-court telling everybody he could make “at least 5 out of 10 shots, easy.” We stared in disbelief as he drilled 5 out of 10 shots from half court while sitting down. From that moment forward we bought into everything Coach Clark ever said about basketball. Cilene Falleiro Rocha has that same talent and impact on her rising stars. She had been a superstar athlete in Brazil, playing volleyball both professionally and in the Olympics (Seoul ’88, Barcelona ’92). Cilene eventually

married Eduardo Drewnick, a former professional basketball player. She retired in 2001 after playing professionally for almost 17 years. Cilene got pregnant and Eduardo decided to come to the USA to get his MBA. They moved to the United States from Brazil in 2001. Cilene was ecstatic when her husband took a job that brought them to North Texas. Cilene liked being a mom but when her child started going to school, she thought to herself “Now what? My life is starting to feel empty.” Part of what made Cilene the superstar athlete she 26

Texas. became was her drive and focus. Her passion still burned and In the second Cilene knew she had more to give year, which Cilene back to the game of volleyball. officially calls Volleyball in North Texas has Instinct VBC’s become a booming sport for kids first year because in the last decade. Cilene found they started from no shortage of opportunities to ground zero consult teams and give private again with all lessons. However the nagging new teams, and thoughts of “I can do more than all new coaches. this” wouldn’t go away. Instinct Volleyball Cilene felt like she was in the had five different right place at the right time. Texas teams comprised produces athletes in almost every of 12, 13 and 14 sport by the mother-lode and year old girls. One of the teams volleyball is no different. Cilene qualified for Nationals. In 2009, also liked the competitive spirit three more teams were added with she found in North Texas. No a successful season that recently matter the sport, it seemed like the ended with 1 team in the top 5, 1 parents in North Texas are driven team in the top 9, 2 teams in the by a desire to keep up with the top 16 and 2 teams in the top 30 competition and make sure their in North Texas and another team kids don’t fall behind. qualified for Nationals. In 2008, Cilene and her The North Texas Region has husband formed their own approximately 130 teams. Cilene organization called Instinct oversees the organization, training Volleyball Club which consisted and supports all teams. At a of one team of 14 year old girls. typical two hour practice, Cilene She says, “I chose the word will lead her girls in 30 minutes instinct because it’s what the game of conditioning followed by 30 requires if you want to play My goal is to teach our kids to be it successfully. committed in everything they do. You need to be able to make If you go about school, your job quick decisions on the or your favorite sport half-way, volleyball court those are the results you will get. that come from your natural instincts.” minutes devoted to individual Cilene and her husband soon skills followed by a team practice. found out that knowing how to Cilene explains her philosophy, play and coach volleyball is much “When I was preparing for the different than running a select Olympics, I’d work out 8 hours a volleyball organization. There day – four hours in the morning were a lot of bumps along the way and four hours at night. We can’t but Cilene was encouraged that her team still finished the season ranked 15th, out of 140 teams in

tell them but show them what to do. My goal is to teach our

in everything they do. If you go about school, your job or your

favorite sport half-way, you will not be very successful.” Cilene is now using

the network she developed

throughout her amazing career to start a new program in the

fastest growing sports in the

world, Beach Volleyball. The first New Wave center was opened in Dallas and will offer clinics throughout the summer.

For more information on Instinct Volleyball, including their new beach volleyball program partnership with Todd Rogers, go to www.instinctvbc.com or contact Cilene at cilenedrunewick@ sportsupporthome.com. 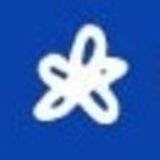