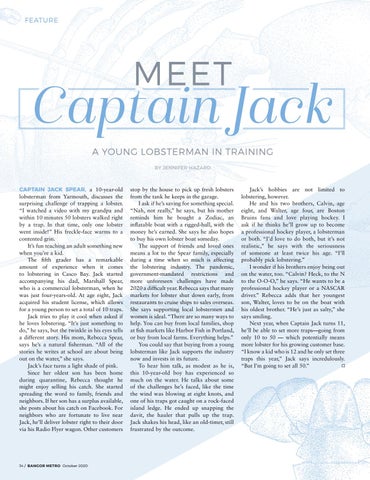 Captain Jack A YOUNG LOBSTERMAN IN TRAINING BY JENNIFER HAZARD

CAPTAIN JACK SPEAR, a 10-year-old lobsterman from Yarmouth, discusses the surprising challenge of trapping a lobster. “I watched a video with my grandpa and within 10 minutes 50 lobsters walked right by a trap. In that time, only one lobster went inside!” His freckle-face warms to a contented grin. It’s fun teaching an adult something new when you’re a kid. The fifth grader has a remarkable amount of experience when it comes to lobstering in Casco Bay. Jack started accompanying his dad, Marshall Spear, who is a commercial lobsterman, when he was just four-years-old. At age eight, Jack acquired his student license, which allows for a young person to set a total of 10 traps. Jack tries to play it cool when asked if he loves lobstering. “It’s just something to do,” he says, but the twinkle in his eyes tells a different story. His mom, Rebecca Spear, says he’s a natural fisherman. “All of the stories he writes at school are about being out on the water,” she says. Jack’s face turns a light shade of pink. Since her oldest son has been home during quarantine, Rebecca thought he might enjoy selling his catch. She started spreading the word to family, friends and neighbors. If her son has a surplus available, she posts about his catch on Facebook. For neighbors who are fortunate to live near Jack, he’ll deliver lobster right to their door via his Radio Flyer wagon. Other customers

stop by the house to pick up fresh lobsters from the tank he keeps in the garage. I ask if he’s saving for something special. “Nah, not really,” he says, but his mother reminds him he bought a Zodiac, an inflatable boat with a rigged-hull, with the money he’s earned. She says he also hopes to buy his own lobster boat someday. The support of friends and loved ones means a lot to the Spear family, especially during a time when so much is affecting the lobstering industry. The pandemic, government-mandated restrictions and more unforeseen challenges have made 2020 a difficult year. Rebecca says that many markets for lobster shut down early, from restaurants to cruise ships to sales overseas. She says supporting local lobstermen and women is ideal. “There are so many ways to help. You can buy from local families, shop at fish markets like Harbor Fish in Portland, or buy from local farms. Everything helps.” You could say that buying from a young lobsterman like Jack supports the industry now and invests in its future. To hear him talk, as modest as he is, this 10-year-old boy has experienced so much on the water. He talks about some of the challenges he’s faced, like the time the wind was blowing at eight knots, and one of his traps got caught on a rock-faced island ledge. He ended up snapping the davit, the hauler that pulls up the trap. Jack shakes his head, like an old-timer, still frustrated by the outcome.

Jack’s hobbies are not limited to lobstering, however. He and his two brothers, Calvin, age eight, and Walter, age four, are Boston Bruins fans and love playing hockey. I ask if he thinks he’ll grow up to become a professional hockey player, a lobsterman or both. “I’d love to do both, but it’s not realistic,” he says with the seriousness of someone at least twice his age. “I’ll probably pick lobstering.” I wonder if his brothers enjoy being out on the water, too. “Calvin? Heck, to the N to the O-O-O,” he says. “He wants to be a professional hockey player or a NASCAR driver.” Rebecca adds that her youngest son, Walter, loves to be on the boat with his oldest brother. “He’s just as salty,” she says smiling. Next year, when Captain Jack turns 11, he’ll be able to set more traps—going from only 10 to 50 — which potentially means more lobster for his growing customer base. “I know a kid who is 12 and he only set three traps this year,” Jack says incredulously. “But I’m going to set all 50.” 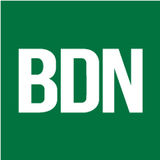