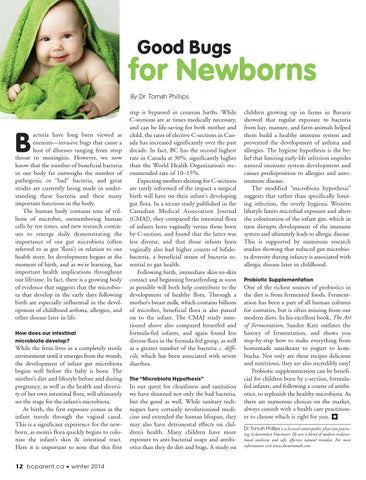 for Newborns By Dr. Tomah Phillips

acteria have long been viewed as enemies—invasive bugs that cause a host of illnesses ranging from strep throat to meningitis. However, we now know that the number of beneficial bacteria in our body far outweighs the number of pathogenic or “bad” bacteria, and great strides are currently being made in understanding these bacteria and their many important functions in the body. The human body contains tens of trillions of microbes, outnumbering human cells by ten times, and new research continues to emerge daily demonstrating the importance of our gut microbiota (often referred to as gut ‘flora’) in relation to our health story. Its development begins at the moment of birth, and as we’re learning, has important health implications throughout our lifetime. In fact, there is a growing body of evidence that suggests that the microbiota that develop in the early days following birth are especially influential in the development of childhood asthma, allergies, and other disease later in life. How does our intestinal microbiota develop?

While the fetus lives in a completely sterile environment until it emerges from the womb, the development of infant gut microbiota begins well before the baby is born. The mother’s diet and lifestyle before and during pregnancy, as well as the health and diversity of her own intestinal flora, will ultimately set the stage for the infant’s microbiota. At birth, the first exposure comes as the infant travels through the vaginal canal. This is a significant experience for the newborn, as mom’s flora quickly begins to colonize the infant’s skin & intestinal tract. Here it is important to note that this first 12 bcparent.ca • winter 2014

step is bypassed in cesarean births. While C-sections are at times medically necessary, and can be life-saving for both mother and child, the rates of elective C-sections in Canada has increased significantly over the past decade. In fact, BC has the second highest rate in Canada at 30%, significantly higher than the World Health Organization’s recommended rate of 10–15%. Expecting mothers electing for C-sections are rarely informed of the impact a surgical birth will have on their infant’s developing gut flora. In a recent study published in the Canadian Medical Association Journal (CMAJ), they compared the intestinal flora of infants born vaginally versus those born by C-section, and found that the latter was less diverse, and that those infants born vaginally also had higher counts of bifidobacteria, a beneficial strain of bacteria essential to gut health. Following birth, immediate skin-to-skin contact and beginning breastfeeding as soon as possible will both help contribute to the development of healthy flora. Through a mother’s breast milk, which contains billions of microbes, beneficial flora is also passed on to the infant. The CMAJ study mentioned above also compared breastfed and formula-fed infants, and again found less diverse flora in the formula fed group, as well as a greater number of the bacteria c. difficile, which has been associated with severe diarrhea. The “Microbiota Hypothesis”

In our quest for cleanliness and sanitation we have shunned not only the bad bacteria, but the good as well. While sanitary techniques have certainly revolutionized medicine and extended the human lifespan, they may also have detrimental effects on children’s health. Many children have more exposure to anti-bacterial soaps and antibiotics than they do dirt and bugs. A study on

children growing up in farms in Bavaria showed that regular exposure to bacteria from hay, manure, and farm animals helped them build a healthy immune system and prevented the development of asthma and allergies. The hygiene hypothesis is the belief that limiting early-life infection impedes natural immune system development and causes predisposition to allergies and autoimmune disease. The modified “microbiota hypothesis” suggests that rather than specifically limiting infection, the overly hygienic Western lifestyle limits microbial exposure and alters the colonization of the infant gut, which in turn disrupts development of the immune system and ultimately leads to allergic disease. This is supported by numerous research studies showing that reduced gut microbiota diversity during infancy is associated with allergic disease later in childhood. Probiotic Supplementation

One of the richest sources of probiotics in the diet is from fermented foods. Fermentation has been a part of all human cultures for centuries, but is often missing from our modern diets. In his excellent book, The Art of Fermentation, Sandor Katz outlines the history of fermentation, and shows you step-by-step how to make everything from homemade sauerkraut to yogurt to kombucha. Not only are these recipes delicious and nutritious, they are also incredibly easy! Probiotic supplementation can be beneficial for children born by c-section, formulafed infants, and following a course of antibiotics, to replenish the healthy microbiota. As there are numerous choices on the market, always consult with a health care practitioner to choose which is right for you. Dr. Tomah Phillips is a licensed naturopathic physician practicing in downtown Vancouver. He uses a blend of modern evidencebased medicine and safe, effective natural remedies. For more information visit www.doctortomah.com 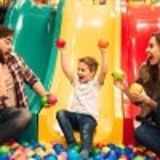