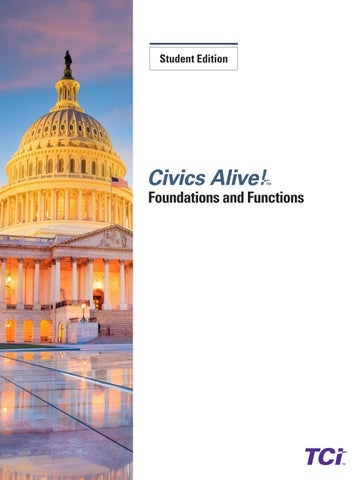 Journey Through a TCI Inquiry-Based Unit Immerse students in history with TCI’s inquiry-based units. Each unit in this program will guide students through the inquiry process, providing opportunities to engage in research projects and to develop arguments around civics and the political system. Additionally, each lesson in the unit offers guiding questions that facilitate class discussion and debate, stunning images for students to investigate, and rich written and visual primary sources.

Video-Based Inquiry Project Each unit begins with a video storyline that presents an interesting scenario and sets the stage for an inquiry project. From asking questions to taking informed action, the Inquiry Project guides students through the inquiry arc and ties lessons together in a meaningful way.

2 Flexible Lessons Each lesson offers multiple approaches to learning. Whether teachers use the Classroom Activity, Video Activity, or Text with Notes, they’ll cover the same content.

Summative Assessments Each lesson and unit comes with a TCI-created summative assessment, which fully assesses student mastery of content and skills. The test is ready to take, but teachers can edit and customize the test to meet the needs of their classrooms.

3 Dive Deeper Each unit includes a variety of print and online resources to go in-depth with primary sources, court cases, and high-interest readings directly related to the content.

INQUIRY PROJECT The process of citizenship can look different depending on the country. In the United States, this process often differs depending on each individual case. However, those wanting to become a U.S. citizen are expected to meet certain requirements. In this unit, you will learn about U.S. citizenship and what it means to be a citizen of the United States. Then explore a compelling question of your choosing. Gather evidence throughout the activities, reading, and additional research to write an argument that answers the question by the end of the unit.

Citizenship and the Rule of Law Find out why the rule of law is such an important concept for society and government in the United States. Then explore what it means to be a U.S. citizen and the obligations and responsibilities of U.S. citizenship. Benchmarks: CG.1.11, CG.2.1, CG.2.2

The Origins and Purposes of Government

INQUIRY PROJECT The vast majority of nation-states identify as some form of democracy, a type of government that is widely associated with political freedom. However, a 2022 report from Freedom House researchers shows that global freedom is declining. In this unit, you will explore the different forms of government as well as the many influences the past has had on the U.S. Government. Then you will act as employees of the U.S. Department of State to create a report on the state of democracy around the world.

Comparing Forms of Government Learn about different forms of government and how their organizational structures compare to each other. Then evaluate the advantages of the United States’ constitutional republic and free market economic system. Benchmarks: CG.3.1, CG.3.2, CG.3.15, HE.1.1

The Roots of American Government Discover the influences of ancient Greece and Rome on the U.S. government and examine how Judeo-Christianity and the Enlightenment period shaped colonial ideas about government. Benchmarks: CG.1.1, CG.1.2, CG.1.4

Moving Toward Independence Explore the impact that documents like the Magna Carta and the Mayflower Compact had on colonial views of government. Then learn how British decisions that affected the colonies led to the creation of the Declaration of Independence. Benchmarks: CG.1.3, CG.1.5, CG.1.6

The Origins and Purposes of Government

The Organization and Functions of U.S. Government

INQUIRY PROJECT In the United States, local, state, and national governments work together to meet the needs of American citizens. The branches of the federal government exist to make sure that no one part of the government has too much power, including the president who leads the executive branch of the United States. In this unit, you will learn more about the roles of each branch in the U.S. government and how they affect American citizens. Then you will act as members of the presidential Cabinet to evaluate an executive department and an agency within that department.

The United States Constitution Find out about the different parts of the U.S. Constitution and their purposes. Then learn about how the Constitution limits the power of the government and its branches. Benchmarks: CG.1.8, CG.1.9, CG.3.3, CG.3.5

Federalism: Local, State, and National Governments Learn about the establishment of a federal system in the United States. Then explore the relationships between the different levels of government and their responsibilities to citizens. Benchmarks: CG.3.4, CG.3.12, CG.3.13

The Legislative Branch Explore the structure, functions, and processes of the legislative branch of government. Then compare the different lawmaking processes between local, state, and national governments. Benchmarks: CG.3.7

The Executive Branch Explore the structure, functions, and processes of the executive branch of government. Then compare the different executive authorities between local, state, and national governments. Benchmarks: CG.3.8

10 The Judicial Branch Explore the structure, functions, and processes of the judicial branch of government. Then learn about the powers and jurisdiction of state and federal courts based on their constitutions. Benchmarks: CG.3.9, CG.2.5 The Organization and Functions of U.S. Government

The Rights and Responsibilities of Citizens

INQUIRY PROJECT The U.S. Constitution has a lot of roles in the functioning of the government. One of these is the protection of rights and freedoms of citizens to address political issues in state and local governments. The interpretation of the U.S. Constitution also has a great impact on Supreme Court decisions. In this unit, you will examine the civil rights and liberties guaranteed in the Bill of Rights and explore the responsibilities of American citizens. Then you will take a closer look at the freedom of speech and examine to what extent this freedom is protected in schools. You will become policy advisers to recommend a speech policy for your local public school.

12 Law, Liberty, and Interpreting the U.S. Constitution Learn about the structure of the U.S. justice system and the influence of the historical code of law. Then explore the effects of landmark Supreme Court decisions. Benchmarks: CG.3.10, CG.3.11

13 Citizen Participation Find out how citizens can address a state or local problem and identify the appropriate levels of government to resolve the issue. Then learn about the different amendments that helped increase citizen participation in politics. Benchmarks: CG.2.10, CG.3.6

The Rights and Responsibilities of Citizens

INQUIRY PROJECT The U.S. political system is designed to give people the power to make their voices heard, to bring about change, and to make a difference in their communities. Citizens can use their power for change within all levels of government. In this unit, you will examine different ways to participate in the U.S. political system and how the media can influence public opinion. Then you will identify a problem in your community and its causes. You will propose a solution and create a strategy to implement it.

LESSONS 14 Parties, Interest Groups, and Public Policy Find out about the political parties in the United States at the different levels of government. Then learn about the role and influences of interest groups in democracy. Benchmarks: CG.2.6, CG.2.8

15 Political Campaigns and Elections Learn about the requirements needed to hold state and national office. Then explore the election and voting process at the different levels of government. Benchmarks: CG.2.6, CG.2.7, CG.3.14

16 Public Opinion and the Media Examine the influence of mass media on public opinion and government processes. Then find out ways to identify bias, symbolism, and propaganda in the media. Benchmarks: CG.2.8, CG2.9, SS.68.HE.1.1

INQUIRY PROJECT How a country prioritizes its own national interests, as well as how countries interact with one another, are important parts of politics. There are many approaches a government may use to address foreign policy issues, and these may determine the types of relationships they maintain with certain countries. In this unit, you will learn about how the United States creates and addresses domestic and foreign policy in addition to the use of soft power and hard power. You will also explore how international organizations and their related countries respond to global issues. Then you will investigate one foreign policy issue and write a memo to recommend how to address the issue.

INQUIRY PROJECT The studies of Geography and Economy can be key in helping us better understand the world. Using maps can help us understand the ways in which the environment influences the population and how population changes affect the environment. Discussing the complexities of the economy, nationally and internationally, can help us better understand how finances can influence standards of living in a nation. In this unit, you will learn about North American geography and the United States economy, as well as how they affect the population. Then you will explore the compelling question by identifying an issue of your choosing. You will gather evidence throughout the activities, reading, and additional research to create a plan that addresses the question by the end of the unit.

LESSONS 19 The Geography of North America Learn how to use maps to locate important physical and cultural landmarks of North America. Explore the differences in state and local geography and how the resources of those locations can influence intergovernmental relationships. Benchmarks: G.1, G.2, G.3, G.4, G.5, G.6

20 Understanding Economics Discover the core concepts of economics and apply them to the U.S. economy. Find out about the roles and responsibilities of U.S. economic institutions and their impact on the national economy. Benchmarks: E.1, E.2, E.3