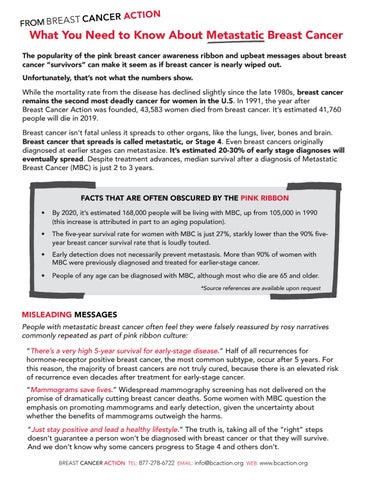 The popularity of the pink breast cancer awareness ribbon and upbeat messages about breast cancer “survivors” can make it seem as if breast cancer is nearly wiped out. Unfortunately, that’s not what the numbers show. While the mortality rate from the disease has declined slightly since the late 1980s, breast cancer remains the second most deadly cancer for women in the U.S. In 1991, the year after Breast Cancer Action was founded, 43,583 women died from breast cancer. It’s estimated 41,760 people will die in 2019. Breast cancer isn’t fatal unless it spreads to other organs, like the lungs, liver, bones and brain. Breast cancer that spreads is called metastatic, or Stage 4. Even breast cancers originally diagnosed at earlier stages can metastasize. It’s estimated 20-30% of early stage diagnoses will eventually spread. Despite treatment advances, median survival after a diagnosis of Metastatic Breast Cancer (MBC) is just 2 to 3 years.

FACTS THAT ARE OFTEN OBSCURED BY THE PINK RIBBON • By 2020, it’s estimated 168,000 people will be living with MBC, up from 105,000 in 1990 (this increase is attributed in part to an aging population). • The five-year survival rate for women with MBC is just 27%, starkly lower than the 90% fiveyear breast cancer survival rate that is loudly touted. • Early detection does not necessarily prevent metastasis. More than 90% of women with MBC were previously diagnosed and treated for earlier-stage cancer. • People of any age can be diagnosed with MBC, although most who die are 65 and older. *Source references are available upon request

MISLEADING MESSAGES People with metastatic breast cancer often feel they were falsely reassured by rosy narratives commonly repeated as part of pink ribbon culture: “There’s a very high 5-year survival for early-stage disease.” Half of all recurrences for hormone-receptor positive breast cancer, the most common subtype, occur after 5 years. For this reason, the majority of breast cancers are not truly cured, because there is an elevated risk of recurrence even decades after treatment for early-stage cancer. “Mammograms save lives.” Widespread mammography screening has not delivered on the promise of dramatically cutting breast cancer deaths. Some women with MBC question the emphasis on promoting mammograms and early detection, given the uncertainty about whether the benefits of mammograms outweigh the harms. “Just stay positive and lead a healthy lifestyle.” The truth is, taking all of the “right” steps doesn’t guarantee a person won’t be diagnosed with breast cancer or that they will survive. And we don’t know why some cancers progress to Stage 4 and others don’t. BREAST CANCER ACTION TEL: 877-278-6722 EMAIL: info@bcaction.org WEB: www.bcaction.org

FACING THE FACTS A NEED FOR BETTER TREATMENTS Meaningful progress in treating MBC is desperately needed. While there are a few people who live a decade or more with MBC, that’s not the reality for most of the more than 150,000 people living with MBC today. Treatments can extend lives or improve quality of life, but all eventually stop working as cancer cells develop resistance. Many drugs used for MBC cause lifealtering, and even life-threatening, side effects due to their toxicity.

Black women are nearly 40% more likely to die from breast cancer than White women. Latina women have relatively low risk of getting breast cancer and dying from it, but are more likely to be diagnosed at advanced stages and to receive inadequate treatment. The mortality differences for women of color reflect broader systemic inequities in access to, cultural relevance of, and quality of care.

A diagnosis of MBC can be financially devastating. One survey found that among insured MBC patients, 30% had been contacted by a collections agency and 36% reported refusing or delaying treatment due to cost. Rates were much higher for uninsured patients.

• Everyone has access to breast cancer information that’s candid, unbiased, and understandable. • New drug approvals are based on evidence that the treatments help patients live longer and feel better. • Data collection accurately captures the scope and outcomes of MBC, including how many patients with early-stage breast cancer have a metastatic recurrence. • Resources are devoted to reversing breast cancer disparities for people of color. • Everyone has access to affordable, high-quality, evidencebased, culturally-competent healthcare. The popularity of the pink ribbon and upbeat messages about breast cancer “survivors” can make it seem as if breast cancer is nearly wiped o...

The popularity of the pink ribbon and upbeat messages about breast cancer “survivors” can make it seem as if breast cancer is nearly wiped o...