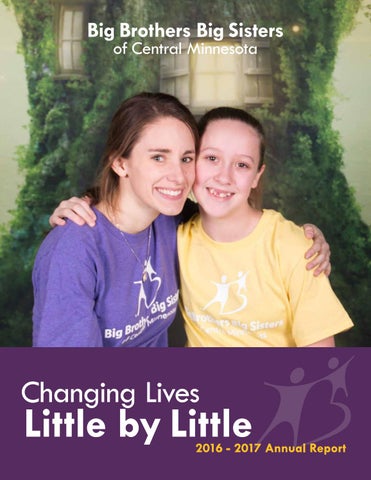 The Mission of Big Brothers Big Sisters of Central Minnesota is to provide children facing adversity with strong and enduring, professionally supported 1-to-1 relationships that change their lives for the better,

BIG IMPACT Dear Friends, We are so excited to be able to share with you in this annual report our program’s growth and the stories of the lives we have touched. Our amazingly generous community of supporters, friends, corporate partners, and foundations make this possible by giving Big Brothers Big Sisters so many things: their time, their treasure, their talent, their ideas, their networks, and much more! This past year has been a year of outreach and engagement. One that has allowed us to meet new people, make new matches, and provide the kids in our program with so many new opportunities and experiences. We are happy to report that we have 790 youth involved in our program. We made 160 new mentoring matches this past year. We have also given $16,400 in scholarship award money to 8 Littles and High School Bigs. Through our College and Career Readiness initiative we’ve engaged 380 youth over the age of 12. Not only have we been able to help support our youths’ dreams through scholarships, we have also been given the opportunity to provide over 420 tickets for our matches to attend various theater and sporting events through donations from our supporters. We launched Dr. Potter Bigs on Campus Mentoring Initiative in the fall of 2016. This program buses youth from South Jr. High to the St. Cloud State University campus twice each month to meet with a mentor, explore campus, and participate in campus activities. We received two awards for this innovative program: a Partners in Education Award from the St. Cloud Area School District and an Outstanding Community Partner Award from St. Cloud State University. Our Program Director, Ann Matvick, celebrated her 20th year with Big Brothers Big Sisters. We’re so grateful for her dedication and are proud of her many achievements that help us better serve the kids in our communities. In the year to come, we will share with you even more about our program’s growth, the growth of the kids we serve, and the deepening of our relationships with you, our community of givers. We hope you are as excited about the future of Big Brothers Big Sisters as we are. Thank you for supporting the children of Central Minnesota. Expect BIG things from us in the very near future.

“Kelly is kind to me and he is there for me when I need him. He has taught me to be respectful and always makes me work harder.” – Nick, Little Brother

IMPACT AREAS We know at Big Brothers Big Sisters that we have IMPACT on three core DUHDVLQDFKLOGÂˇVOLIH,QFUHDVHG&RQĂ&#x20AC;GHQFH(GXFDWLRQDO6XFFHVVDQG Avoiding Risky Behaviors. Research proves that children enrolled in Big Brothers Big Sisters programs are more likely to form stronger relationships with family and friends, perform better in school, and are less likely to skip school or use illegal drugs or alcohol.

Strong positive relationships IRVWHUFRQĂ&#x20AC;GHQFHDQG improve decision making. Only 57% of Central Minnesota children report having at least one supportive adult in their life.

A childâ&#x20AC;&#x2122;s academic success UHIHUVWRWKHLUSURĂ&#x20AC;FLHQF\ in math and reading. 64% of Stearns County students do not meet academic standards in math, reading, and science.

of our Littles have improved WKHLUVHOIFRQĂ&#x20AC;GHQFHEHFDXVH of their Big Brother or Sister.

of our Littles have shown improvement in their academic performance.

of Littles have improved their attitudes toward risky behaviors.

*Data taken from the Minnesota Student Survey: a triennial survey of young people regarding a variety of risk and protective factors, and the Minnesota Report Card: a tool designed to provide access to district and school information, test results, and other critical data.

Eric and Lee have been matched with their Little Brother Caleb since he was 10 years old. Caleb had originally wanted a Big Brother, but was pleasantly surprised when he was matched with a Big Couple. He considers his Big Sister Lee to be a bonus!

Caleb has shown an LQFUHDVHLQFRQĂ&#x20AC;GHQFH maturity, respectfulness, and politeness as a result of his time spent with Eric and Lee.

Eric and Lee have validated their strong commitment as mentors many times over. They have been consistent, positive, and fun role models! Eric even attended an overnight Boy Scouts getaway with Caleb, which meant a lot to him as most young boys attend with their fathers. Eric and Lee have always encouraged Caleb to think about his future and what that could look like for him. They have taken Caleb to the University of Minnesota several times when visiting their two children who attended the university.

“This relationship is one of the most amazing I’ve had. Our bond is strong and I’m proud to call her my sister.” – Dezirae, Little Sister”

Shawnté assisted 'H]LUDHLQÀOOLQJ out her college DQGÀQDQFLDODLG applications to help ensure that she stays on a path towards a brighter future.

Dezirae was matched with her Big Sister Shawnté in 2008. They began their journey in the school-based program when Dezirae was 9 years old and Shawnté was a college student. As their friendship formed and their bond grew closer, they transitioned their match into our communitybased program where their opportunities for new match activities broadened immensely. Dezirae and Shawnté enjoy going shopping together, playing board games, making pottery, and baking. Dezirae and Shawnté’s relationship has grown closer and stronger with each passing year. They consider one another family. Dezirae and her mother have even spent major holidays with Shawnté’s family for many years.

Big Brother Tony Lotzer and Little Brother Mathias have been together for over 8 years. Their match began when Mathias was a 1st grader and Tony was a young college student. Over the years, they have enjoyed going to movies, attending sporting events, and spending time outdoors. They even took a trip to Valleyfair together.

Since being matched with Tony, Mathiasâ&#x20AC;&#x2122; FRQĂ&#x20AC;GHQFHKDVLQFUHDVHGKLVVRFLDOVNLOOV have improved, and he began to excel in school. This past spring, Mathias was selected as Snowdaze Royalty for his high school class. Tony and Mathias are an incredible match with an unbreakable bond!

DOES IT TAKE TO MAKE AND SUPPORT A MATCH?

communicating with Bigs, Littles and families.

Through generous donations we were able to give away over

for our matches to attend theater performances, sporting events, and other special outings.

8 SCHOLARSHIPS with the amount totaling

• There is no charge for families, youth, or mentors to participate in our program. • We encourage mentoring matches to focus on their relationship. • We do not ask our matches to fund-raise.

OF THE BBBS MISSION Without our volunteers we would not be able to execute our mission and would not exist! Our Big Brothers and Sisters are the magic makers and dream weavers! Over 1,000 different people served as mentors, committee members, volunteers, or interns at Big Brothers Big Sisters of Central Minnesota in 2016-2017 accounting for 31,705 total volunteer hours valued at $765,359.* “I have to say, my proudest moment is hearing that my Little is doing things at her school or in the community to help others. And the greatest part is that she is making a positive impact on others out of the goodness of her heart.” – Karen Radi, Big Sister

BIGS IN BLUE Bigs in Blue is an innovative initiative that SDLUVSROLFHRIÃ&#x20AC;FHUVZLWKORFDO\RXWKZKRDUH facing unique challenges. Bigs in Blue builds bridges between youth & law enforcement. We currently have partnerships with the St. Cloud, Sartell, and Waite Park Police Departments and are looking to expand to other departments in our service area.

BECOME A SPONSOR 6SRQVRUVSURYLGHPDMRURQJRLQJÃ&#x20AC;QDQFLDOGRQDWLRQVWR%LJ%URWKHUV%LJ6LVWHUV of Central Minnesota in support of our mission to mentor children facing adversity. We are profoundly grateful for the support provided by our sponsors and are KDSS\WRFXVWRPL]HVSRQVRUVKLSEHQHÃ&#x20AC;WVWRPHHWDFRPSDQ\Â·VXQLTXHPDUNHWLQJ QHHGV$ORQJZLWKWKHIROORZLQJEHQHÃ&#x20AC;WVVSRQVRUVUHFHLYHYDULRXVDPHQLWLHVUHODWLYH to the level of giving at Big Brother Big Sister events held within the community.

HOW CAN YOU MAKE A BIG IMPACT? VOLUNTEER With over 100 children on our waiting list, we are always in need of Big Brothers, Big Sisters, Big Couples, and Big Families. Our program includes both School-Based and Community-Based Bigs. Call us today WRÃ&#x20AC;QGRXWPRUH DONATE Make a donation online: www.bbbscentralmn.org Mail donation to: Big Brothers Big Sisters of Central Minnesota 203 Cooper Ave N, Suite 162 Saint Cloud, MN 56303

DOUBLE YOUR GIFT Participate in your employerâ&#x20AC;&#x2122;s matching gift program. INVITE US TO VISIT We can visit your workplace over lunch for your team to learn about BBBS and how your company can get involved. PLANNED GIVING Leave a BIG Legacy; include us in your estate or will. BECOME A SPONSOR 6SRQVRUVSURYLGHPDMRURQJRLQJÃ&#x20AC;QDQFLDO donations to BBBS in support of our mission to mentor children facing adversity.

Even little amounts can make a big difference!

SAVE THE DATE Bowl for Kids' Sake October 2018 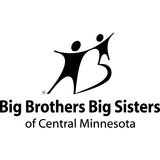