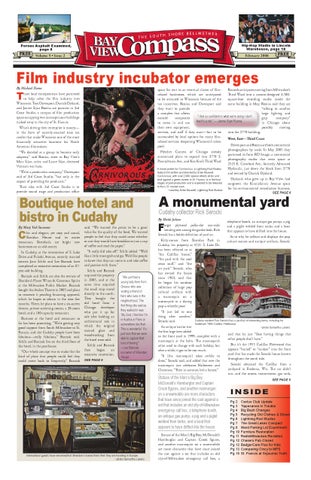 Film industry incubator emerges By Michael Timm hree local entrepreneurs have partnered to help usher the ﬁlm industry into Wisconsin. Tom Davenport, Darrick Dysland, and Janine Sijan Rozina are partners in 3rd Coast Studio, a campus of ﬁlm production space occupying two inconspicuous buildings tucked away in the city of St. Francis. What’s driving their enterprise is money— in the form of recently-enacted state tax credits that make Wisconsin one of the most ﬁnancially attractive locations for North American ﬁlmmakers. “We decided as a group to become early adapters,” said Rozina, sister to Bay View’s Marc Sijan, artist, and Lance Sijan, deceased Vietnam war hero. “We’re a production company,” Davenport said of 3rd Coast Studio, “but only in the respect of providing for producers.” Their idea with 3rd Coast Studio is to provide sound stage and production oﬃce

Records anticipates moving from Milwaukee’s space for rent to an eventual cluster of ﬁlmThird Ward into a custom-designed 3,500related businesses, which are anticipated square-foot recording studio inside the to be attracted to Wisconsin because of the same building in May. Rozina said they are tax incentives. Rozina and Davenport said “talking to another they want to provide large lighting and a complex that allows “I feel so confident in what we’re doing I don’t grip company” outside companies feel it’s a risk.” — Janine Sijan Rozina in Chicago about to come in and use possibly moving their own equipment, into the 3770 building. services, and staﬀ if they want—but to be surrounded by local options for many ﬁlmWest, East—Third Coast related services, deepening Wisconsin’s talent Davenport and Rozina are both commercial pool. photographers by trade. In May 2005 they Fletcher Camera of Chicago already partnered to form RD Image, a commercial announced plans to expand into 3770 S. photography studio that rents space at Pennsylvania Ave., and Ken Krei’s Third Ward 2525 E. Crawford Ave., formerly Advanced Hydraulic, just down the block from 3770 A movie poster for Carnivorous, a Lightning Rod Studios feature film written and directed by Drew Maxwell. and owned by Darrick Dysland. Carnivorous, with over 2,000 special effects shots and Dysland, who grew up in Bay View, had shot against a green screen in St. Francis, is in the final stages of post-production and is expected to be released outgrown the Kinnickinnic Avenue space to the U.S. market soon. for his environmental remediation business, ~courtesy Drew Maxwell, Lightning Rod Studios

Boutique hotel and bistro in Cudahy By Mary Vuk Sussman hic and elegant, yet cozy and casual, Sheridan House and its onsite restaurant, Sheridan’s, are bright new businesses on an old corner. In Cudahy, at the intersection of S. Lake Drive and Pulaski Avenue, recently married owners Jane Schilz and Lee Barczak have completed an extensive restoration of an 87year-old building. Barczak and Schilz are also the owners of Sheridan’s Finest Wines & Generous Spirits at the Milwaukee Public Market. Barczak bought the Avalon Theatre in 2005 and plans to renovate it pending ﬁnancing approval, which he hopes to obtain in the next few months. There, he plans to have a six-screen theater, private screening rooms, a 20-room hotel, and a 100-capacity restaurant. Business at the hotel and restaurant so far has been promising. “We’re getting very good support from South Milwaukee to St. Francis, and the Cudahy people have been fabulous—really fabulous,” Barczak said. Schilz and Barczak live on the third ﬂoor of the hotel, in the penthouse. “Our whole concept was to make this the kind of place that people could feel they could come back to frequently,” Barczak

said. “We wanted the prices to be a great value for the quality of the food. We wanted people to feel that they could come whether or not they would have breakfast or just a cup of coﬀee and read the paper.” “It really did take oﬀ,” Schilz added. “We’d like a little more grab and go. We’d like people to know that they can come in and take coﬀee and pastries with them.” Schilz and Barczak acquired the property “We just had a in 2005, and at the young lady here from same time acquired Greece who was the small strip motel visiting a friend of directly to the north. hers who lives in the They bought the neighborhood. The old hotel from a first thing she said as Chicago developer they walked in was who put it up for ‘My God, I feel like I’m sale after holding an in Austria or Paris or architectural sale in somewhere like that. which the original This is wonderful.’ It’s stained glass and just nice that we were woodworking from able to capture that the hotel were sold. kind of feeling.” Schilz and Barczak —Lee Barczak, then began an co-owner of Sheridan extensive renovation. House SEE PAGE 9

By Sheila Julson telephone booth, an antique gas pump, a pig orget plywood polka-dot rear-ends and a piglet welded from tanks, and a boat bending over among the garden beds. Rick that appears to have drifted into the house. Serocki has a bolder deﬁnition of yard art. As to why he collects and displays the pop Kitty-corner from Sheridan Park in culture statues and antique artifacts, Serocki Cudahy, his property at 4531 S. Lake Dr. has been referred to as “the Cadillac house,” “the yard with the cool retro stuﬀ,” and “the art yard.” Serocki, who has owned the house since 1983, said that he began his outdoor collection of large pop cultural artifacts with a mannequin on a motorcycle in a daring pop-a-wheelie pose. “It just led to one thing after another,” Cudahy resident Rick Serocki has a yard full of interesting items, including his Serocki said. trademark 1955 Cadillac Fleetwood. An antique tractor was ~photo Samantha Lukens the ﬁrst large item added said that he just “likes having things that to the front yard in 1999, complete with a other people don’t have.” mannequin at the helm. The mannequin’s But it’s the 1955 Cadillac Fleetwood that attire used to change with each holiday, but appears “buried” or “sunken” into the front after a while, it got to be too much. yard that has made the Serocki house known “It [the mannequin] takes awhile to throughout the south side. dress,” Serocki said, and added that now the Serocki obtained the Cadillac from a mannequin just celebrates Halloween and junkyard in Fredonia, Wis. The car didn’t Christmas. “Then in summer, he’s a farmer.” run, and the motor, transmission, gas tank,

Statues of the Marc’s Big Boy, McDonald’s Hamburglar and Captain Crook figures, and another mannequin on a snowmobile are more characters that have since joined the cast against a set that includes an old city-of-Milwaukee emergency call box, a telephone booth, an antique gas pump, a pig and a piglet welded from tanks, and a boat that appears to have drifted into the house.

International guests have remarked that Sheridan’s makes them think they are traveling in Europe. ~photo Samantha Lukens

Statues of the Marc’s Big Boy, McDonald’s Hamburglar and Captain Crook ﬁgures, and another mannequin on a snowmobile are more characters that have since joined the cast against a set that includes an old city-of-Milwaukee emergency call box, a 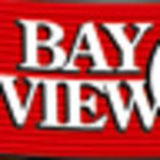