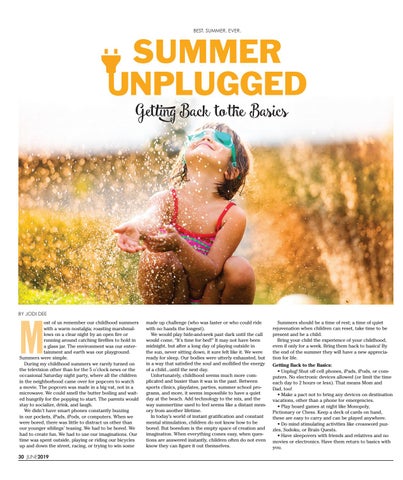 SUMMER UNPLUGGED Get� Back to�e Basics

ost of us remember our childhood summers with a warm nostalgia; roasting marshmallows on a clear night by an open fire or running around catching fireflies to hold in a glass jar. The environment was our entertainment and earth was our playground. Summers were simple. During my childhood summers we rarely turned on the television other than for the 5 o’clock news or the occasional Saturday night party, where all the children in the neighborhood came over for popcorn to watch a movie. The popcorn was made in a big vat, not in a microwave. We could smell the butter boiling and waited hungrily for the popping to start. The parents would stay to socialize, drink, and laugh. We didn’t have smart phones constantly buzzing in our pockets, iPads, iPods, or computers. When we were bored, there was little to distract us other than our younger siblings’ teasing. We had to be bored. We had to create fun. We had to use our imaginations. Our time was spent outside, playing or riding our bicycles up and down the street, racing, or trying to win some

made up challenge (who was faster or who could ride with no hands the longest). We would play hide-and-seek past dark until the call would come, “It’s time for bed!” It may not have been midnight, but after a long day of playing outside in the sun, never sitting down, it sure felt like it. We were ready for sleep. Our bodies were utterly exhausted, but in a way that satisfied the soul and mollified the energy of a child...until the next day. Unfortunately, childhood seems much more complicated and busier than it was in the past. Between sports clinics, playdates, parties, summer school programs, and more, it seems impossible to have a quiet day at the beach. Add technology to the mix, and the way summertime used to feel seems like a distant memory from another lifetime. In today’s world of instant gratification and constant mental stimulation, children do not know how to be bored. But boredom is the empty space of creation and imagination. When everything comes easy, when questions are answered instantly, children often do not even know they can figure it out themselves.

Summers should be a time of rest; a time of quiet rejuvenation when children can reset, take time to be present and be a child. Bring your child the experience of your childhood, even if only for a week. Bring them back to basics! By the end of the summer they will have a new appreciation for life. Getting Back to the Basics: • Unplug! Shut off cell phones, iPads, iPods, or computers. No electronic devices allowed (or limit the time each day to 2 hours or less). That means Mom and Dad, too! • Make a pact not to bring any devices on destination vacations, other than a phone for emergencies. • Play board games at night like Monopoly, Pictionary or Chess. Keep a deck of cards on hand, these are easy to carry and can be played anywhere. • Do mind stimulating activities like crossword puzzles, Sudoku, or Brain Quests. • Have sleepovers with friends and relatives and no movies or electronics. Have them return to basics with you. 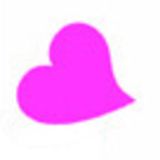