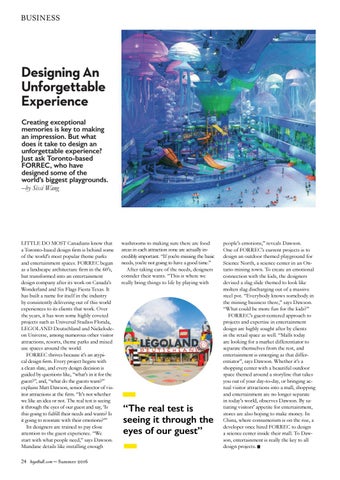 Designing An Unforgettable Experience Creating exceptional memories is key to making an impression. But what does it take to design an unforgettable experience? Just ask Toronto-based FORREC, who have designed some of the world’s biggest playgrounds. –by Sissi Wang

LITTLE DO MOST Canadians know that a Toronto-based design firm is behind some of the world’s most popular theme parks and entertainment spaces. FORREC began as a landscape architecture firm in the 60’s, but transformed into an entertainment design company after its work on Canada’s Wonderland and Six Flags Fiesta Texas. It has built a name for itself in the industry by consistently delivering out of this world experiences to its clients that work. Over the years, it has won some highly coveted projects such as Universal Studios Florida, LEGOLAND Deutschland and Nickelodeon Universe, among numerous other visitor attractions, resorts, theme parks and mixed use spaces around the world. FORREC thrives because it’s an atypical design firm. Every project begins with a clean slate, and every design decision is guided by questions like, “what’s in it for the guest?”, and, “what do the guests want?” explains Matt Dawson, senior director of visitor attractions at the firm. “It’s not whether we like an idea or not. The real test is seeing it through the eyes of our guest and say, ‘Is this going to fulfill their needs and wants? Is it going to resonate with their emotions?’” Its designers are trained to pay close attention to the guest experience. “We start with what people need,” says Dawson. Mundane details like installing enough

washrooms to making sure there are food areas in each attraction zone are actually incredibly important. “If you’re missing the basic needs, you’re not going to have a good time.” After taking care of the needs, designers consider their wants. “This is where we really bring things to life by playing with

people’s emotions,” reveals Dawson. One of FORREC’s current projects is to design an outdoor themed playground for Science North, a science center in an Ontario mining town. To create an emotional connection with the kids, the designers devised a slag slide themed to look like molten slag discharging out of a massive steel pot. “Everybody knows somebody in the mining business there,” says Dawson. “What could be more fun for the kids?” FORREC’s guest-centered approach to projects and expertise in entertainment design are highly sought after by clients in the retail space as well. “Malls today are looking for a market differentiator to separate themselves from the rest, and entertainment is emerging as that differentiator”, says Dawson. Whether it’s a shopping center with a beautiful outdoor space themed around a storyline that takes you out of your day-to-day, or bringing actual visitor attractions into a mall, shopping and entertainment are no longer separate in today’s world, observes Dawson. By satiating visitors’ appetite for entertainment, stores are also hoping to make money. In China, where consumerism is on the rise, a developer once hired FORREC to design a science center inside their mall. To Dawson, entertainment is really the key to all design projects. 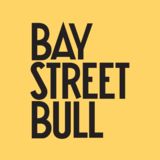