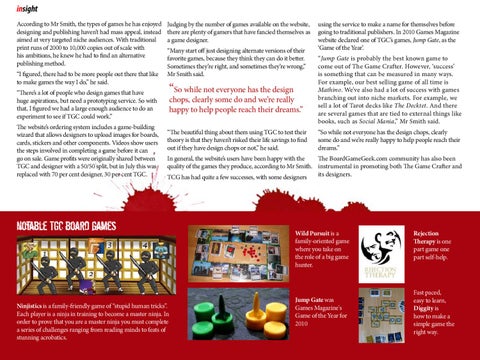 insight According to Mr Smith, the types of games he has enjoyed designing and publishing haven’t had mass appeal, instead aimed at very targeted niche audiences. With traditional print runs of 2000 to 10,000 copies out of scale with his ambitions, he knew he had to find an alternative publishing method. “I figured, there had to be more people out there that like to make games the way I do,” he said. “There’s a lot of people who design games that have huge aspirations, but need a prototyping service. So with that, I figured we had a large enough audience to do an experiment to see if TGC could work.” The website’s ordering system includes a game-building wizard that allows designers to upload images for boards, cards, stickers and other components. Videos show users the steps involved in completing a game before it can go on sale. Game profits were originally shared between TGC and designer with a 50/50 split, but in July this was replaced with 70 per cent designer, 30 per cent TGC.

Judging by the number of games available on the website, there are plenty of gamers that have fancied themselves as a game designer. “Many start off just designing alternate versions of their favorite games, because they think they can do it better. Sometimes they’re right, and sometimes they’re wrong,” Mr Smith said.

using the service to make a name for themselves before going to traditional publishers. In 2010 Games Magazine website declared one of TGC’s games, Jump Gate, as the ‘Game of the Year’.

“So while not everyone has the design

“Jump Gate is probably the best known game to come out of The Game Crafter. However, ‘success’ is something that can be measured in many ways. For example, our best selling game of all time is Mathino. We’ve also had a lot of success with games branching out into niche markets. For example, we sell a lot of Tarot decks like The Decktet. And there are several games that are tied to external things like books, such as Social Mania,” Mr Smith said.

“The beautiful thing about them using TGC to test their theory is that they haven’t risked their life savings to find out if they have design chops or not,” he said.

“So while not everyone has the design chops, clearly some do and we’re really happy to help people reach their dreams.”

chops, clearly some do and we’re really happy to help people reach their dreams.”

In general, the website’s users have been happy with the The BoardGameGeek.com community has also been quality of the games they produce, according to Mr Smith. instrumental in promoting both The Game Crafter and its designers. TCG has had quite a few successes, with some designers

Ninjistics is a family-friendly game of “stupid human tricks”. Each player is a ninja in training to become a master ninja. In order to prove that you are a master ninja you must complete a series of challenges ranging from reading minds to feats of stunning acrobatics.

Wild Pursuit is a family-oriented game where you take on the role of a big game hunter.

Rejection Therapy is one part game one part self-help.

Fast paced, easy to learn, Diggity is how to make a simple game the right way.

The August/September 2011 issue of Battlespace magazine, a digital magazine for strategy gamers. 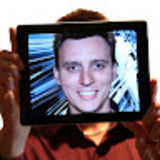