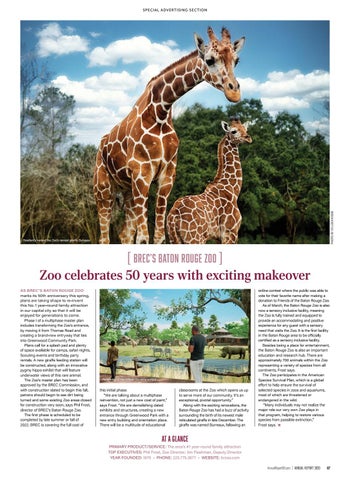 [ BREC’S BATON ROUGE ZOO ] Zoo celebrates 50 years with exciting makeover AS BREC’S BATON ROUGE ZOO marks its 50th anniversary this spring, plans are taking shape to re-invent this No. 1 year-round family attraction in our capital city so that it will be enjoyed for generations to come. Phase I of a multiphase master plan includes transforming the Zoo’s entrance, by moving it from Thomas Road and creating a brand-new entryway that ties into Greenwood Community Park. Plans call for a splash pad and plenty of space available for camps, safari nights, Scouting events and birthday party rentals. A new giraffe feeding station will be constructed, along with an innovative pygmy hippo exhibit that will feature underwater views of this rare animal. The Zoo’s master plan has been approved by the BREC Commission, and with construction slated to begin this fall, patrons should begin to see dirt being turned and some existing Zoo areas closed for construction very soon, says Phil Frost, director of BREC’s Baton Rouge Zoo. The first phase is scheduled to be completed by late summer or fall of 2022. BREC is covering the full cost of

Rendering of the African Savanna exhibit

this initial phase. “We are talking about a multiphase reinvention, not just a new coat of paint,” says Frost. “We are demolishing dated exhibits and structures, creating a new entrance through Greenwood Park with a new entry building and orientation plaza. There will be a multitude of educational

classrooms at the Zoo which opens us up to serve more of our community. It’s an exceptional, pivotal opportunity.” Along with the exciting renovations, the Baton Rouge Zoo has had a buzz of activity surrounding the birth of its newest male reticulated giraffe in late December. The giraffe was named Burreaux, following an

online contest where the public was able to vote for their favorite name after making a donation to Friends of the Baton Rouge Zoo. As of March, the Baton Rouge Zoo is also now a sensory inclusive facility, meaning the Zoo is fully trained and equipped to provide an accommodating and positive experience for any guest with a sensory need that visits the Zoo. It is the first facility in the Baton Rouge area to be officially certified as a sensory inclusive facility. Besides being a place for entertainment, the Baton Rouge Zoo is also an important education and research hub. There are approximately 700 animals within the Zoo representing a variety of species from all continents, Frost says. The Zoo participates in the American Species Survival Plan, which is a global effort to help ensure the survival of selected species in zoos and aquariums, most of which are threatened or endangered in the wild. “Many individuals may not realize the major role our very own Zoo plays in that program, helping to restore various species from possible extinction,” Frost says.