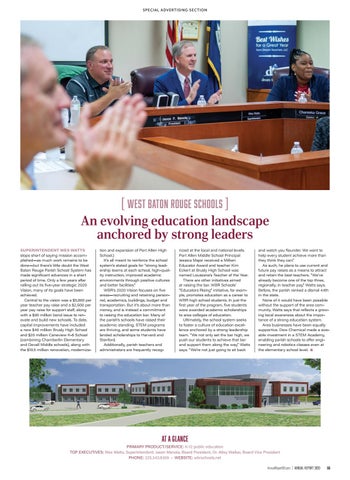 [ WEST BATON ROUGE SCHOOLS ] An evolving education landscape anchored by strong leaders SUPERINTENDENT WES WATTS stops short of saying mission accomplished—as much work remains to be done—but there’s little doubt the West Baton Rouge Parish School System has made significant advances in a short period of time. Only a few years after rolling out its five-year strategic 2020 Vision, many of its goals have been achieved. Central to the vision was a $5,000 per year teacher pay raise and a $2,500 per year pay raise for support staff, along with a $90 million bond issue to renovate and build new schools. To date, capital improvements have included a new $40 million Brusly High School and $20 million Caneview K-8 School (combining Chamberlin Elementary and Devall Middle schools), along with the $10.5 million renovation, moderniza-

tion and expansion of Port Allen High School.) It’s all meant to reinforce the school system’s stated goals for “strong leadership teams at each school, high-quality instruction, improved academic environments through positive cultures and better facilities.” WBR’s 2020 Vision focuses on five areas—recruiting and retaining personnel, academics, buildings, budget and transportation. But it’s about more than money, and is instead a commitment to raising the education bar. Many of the parish’s schools have raised their academic standing, STEM programs are thriving, and some students have landed scholarships to Harvard and Stanford. Additionally, parish teachers and administrators are frequently recog-

nized at the local and national levels. Port Allen Middle School Principal Jessica Major received a Milken Educator Award and teacher Kim Eckert at Brusly High School was named Louisiana’s Teacher of the Year. There are other initiatives aimed at raising the bar. WBR Schools’ “Educators Rising” initiative, for example, promotes education as a career to WBR high school students. In just the first year of the program, five students were awarded academic scholarships to area colleges of education. Ultimately, the school system seeks to foster a culture of education excellence anchored by a strong leadership team. “We not only set the bar high, we push our students to achieve that bar and support them along the way,” Watts says. “We’re not just going to sit back

and watch you flounder. We want to help every student achieve more than they think they can.” As such, he plans to use current and future pay raises as a means to attract and retain the best teachers. “We’ve already become one of the top three, regionally, in teacher pay,” Watts says. Before, the parish ranked a dismal 44th in the state. None of it would have been possible without the support of the area community. Watts says that reflects a growing local awareness about the importance of a strong education system. Area businesses have been equally supportive. Dow Chemical made a sizeable investment in a STEM Academy, enabling parish schools to offer engineering and robotics classes even at the elementary school level.