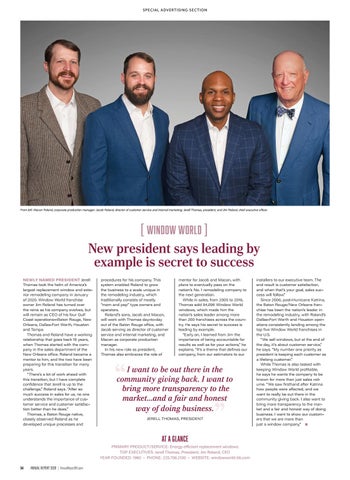 [ WINDOW WORLD ] New president says leading by example is secret to success procedures for his company. This system enabled Roland to grow the business to a scale unique in the remodeling industry, which traditionally consists of mostly “mom and pop” type owners and operators. Roland’s sons, Jacob and Macon, will work with Thomas day-to-day out of the Baton Rouge office, with Jacob serving as director of customer service and internal marketing, and Macon as corporate production manager. In his new role as president, Thomas also embraces the role of

mentor for Jacob and Macon, with plans to eventually pass on the nation’s No. 1 remodeling company to the next generation. While in sales, from 2005 to 2016, Thomas sold 94,096 Window World windows, which made him the nation’s sales leader among more than 200 franchises across the country. He says his secret to success is leading by example. “Early on, I learned from Jim the importance of being accountable for results as well as for your actions,” he explains. “It’s a theme that defines our company, from our estimators to our

I want to be out there in the community giving back. I want to bring more transparency to the market…and a fair and honest way of doing business. JERELL THOMAS, PRESIDENT

NEWLY NAMED PRESIDENT Jerell Thomas took the helm of America’s largest replacement window and exterior remodeling company in January of 2020. Window World franchise owner Jim Roland has turned over the reins as his company evolves, but will remain as CEO of his four Gulf Coast operations—Baton Rouge, New Orleans, Dallas-Fort Worth, Houston and Tampa. Thomas and Roland have a working relationship that goes back 16 years, when Thomas started with the company in the sales department of the New Orleans office. Roland became a mentor to him, and the two have been preparing for this transition for many years. “There’s a lot of work ahead with this transition, but I have complete confidence that Jerell is up to the challenge,” Roland says. “After so much success in sales for us, no one understands the importance of customer service and customer satisfaction better than he does.” Thomas, a Baton Rouge native, closely observed Roland as he developed unique processes and

installers to our executive team. The end result is customer satisfaction, and when that’s your goal, sales success will follow.” Since 2006, post-Hurricane Katrina, the Baton Rouge/New Orleans franchise has been the nation’s leader in the remodeling industry, with Roland’s Dallas-Fort Worth and Houston operations consistently landing among the top five Window World franchises in the U.S. “We sell windows, but at the end of the day, it’s about customer service,” he says. “My number one priority as president is keeping each customer as a lifelong customer.” While Thomas is also tasked with keeping Window World profitable, he says he wants the company to be known for more than just sales volume. “We saw firsthand after Katrina how people were affected, and we want to really be out there in the community giving back. I also want to bring more transparency to the market and a fair and honest way of doing business. I want to show our customers that we are more than just a window company.”