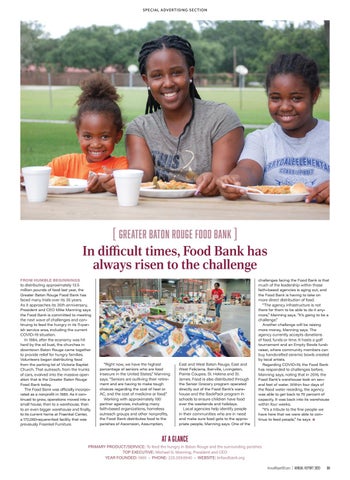 [ GREATER BATON ROUGE FOOD BANK ] In difficult times, Food Bank has always risen to the challenge FROM HUMBLE BEGINNINGS to distributing approximately 13.5 million pounds of food last year, the Greater Baton Rouge Food Bank has faced many trials over its 35 years. As it approaches its 35th anniversary, President and CEO Mike Manning says the Food Bank is committed to meeting the next wave of challenges and continuing to feed the hungry in its 11-parish service area, including the current COVID-19 situation. In 1984, after the economy was hit hard by the oil bust, the churches in downtown Baton Rouge came together to provide relief for hungry families. Volunteers began distributing food from the parking lot of Victoria Baptist Church. That outreach, from the trunks of cars, evolved into the massive operation that is the Greater Baton Rouge Food Bank today. The Food Bank was officially incorporated as a nonprofit in 1985. As it continued to grow, operations moved into a small house, then to a warehouse, then to an even bigger warehouse and finally, to its current home at Fraenkel Center, a 172,000-square-foot facility that was previously Fraenkel Furniture.

“Right now, we have the highest percentage of seniors who are food insecure in the United States,” Manning says. “Seniors are outliving their retirement and are having to make tough choices regarding the cost of heat or AC, and the cost of medicine or food.” Working with approximately 100 partner agencies, including many faith-based organizations, homeless outreach groups and other nonprofits, the Food Bank distributes food to the parishes of Ascension, Assumption,

East and West Baton Rouge, East and West Feliciana, Iberville, Livingston, Pointe Coupee, St. Helena and St. James. Food is also distributed through the Senior Grocery program operated directly out of the Food Bank’s warehouse and the BackPack program in schools to ensure children have food over the weekends and holidays. Local agencies help identify people in their communities who are in need and make sure food gets to the appropriate people, Manning says. One of the

challenges facing the Food Bank is that much of the leadership within those faith-based agencies is aging out, and the Food Bank is having to take on more direct distribution of food. “The agency infrastructure is not there for them to be able to do it anymore,” Manning says. “It’s going to be a challenge.” Another challenge will be raising more money, Manning says. The agency currently accepts donations of food, funds or time. It hosts a golf tournament and an Empty Bowls fundraiser, where community members can buy handcrafted ceramic bowls created by local artists. Regarding COVID-19, the Food Bank has responded to challenges before, Manning says, noting that in 2016, the Food Bank’s warehouse took on several feet of water. Within four days of the flood water receding, the agency was able to get back to 70 percent of capacity. It was back into its warehouse within four weeks. “It’s a tribute to the fine people we have here that we were able to continue to feed people,” he says