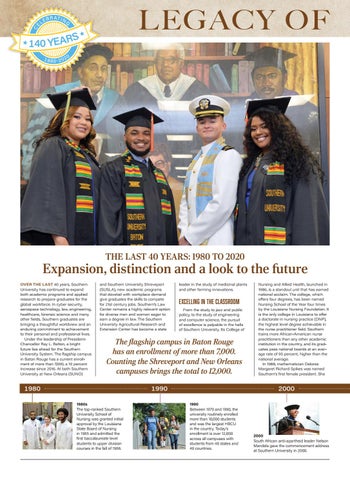 Expansion, distinction and a look to the future OVER THE LAST 40 years, Southern University has continued to expand both academic programs and applied research to prepare graduates for the global workforce. In cyber security, aerospace technology, law, engineering, healthcare, forensic science and many other fields, Southern graduates are bringing a thoughtful worldview and an enduring commitment to achievement to their personal and professional lives. Under the leadership of PresidentChancellor Ray L. Belton, a bright future lies ahead for the Southern University System. The flagship campus in Baton Rouge has a current enrollment of more than 7,000, a 10 percent increase since 2016. At both Southern University at New Orleans (SUNO)

and Southern University Shreveport (SUSLA), new academic programs that dovetail with workplace demand give graduates the skills to compete for 21st century jobs. Southern’s Law Center remains a highly relevant option for diverse men and women eager to earn a degree in law. The Southern University Agricultural Research and Extension Center has become a state

leader in the study of medicinal plants and other farming innovations.

Excelling in the classroom From the study to jazz and public policy, to the study of engineering and computer science, the pursuit of excellence is palpable in the halls of Southern University. Its College of

The flagship campus in Baton Rouge has an enrollment of more than 7,000. Counting the Shreveport and New Orleans campuses brings the total to 12,000.

1990 1980s The top-ranked Southern University School of Nursing was granted initial approval by the Louisiana State Board of Nursing in 1985 and admitted the first baccalaureate level students to upper division courses in the fall of 1986.

Nursing and Allied Health, launched in 1986, is a standout unit that has earned national acclaim. The college, which offers four degrees, has been named Nursing School of the Year four times by the Louisiana Nursing Foundation. It is the only college in Louisiana to offer a doctorate in nursing practice (DNP), the highest level degree achievable in the nurse practitioner field. Southern trains more African-American nurse practitioners than any other academic institution in the country, and its graduates pass national boards at an average rate of 95 percent, higher than the national average. In 1988, mathematician Delores Margaret Richard Spikes was named Southern’s first female president. She