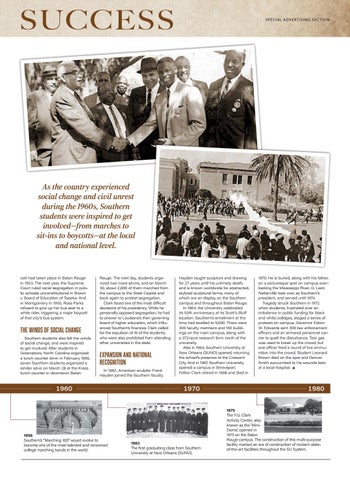 As the country experienced social change and civil unrest during the 1960s, Southern students were inspired to get involved—from marches to sit-ins to boycotts—at the local and national level.

cott had taken place in Baton Rouge in 1953. The next year, the Supreme Court ruled racial segregation in public schools unconstitutional in Brown v. Board of Education of Topeka. And in Montgomery in 1955, Rosa Parks refused to give up her bus seat to a white rider, triggering a major boycott of that city’s bus system.

Rouge. The next day, students organized two more sit-ins, and on March 30, about 2,000 of them marched from the campus to the State Capitol and back again to protest segregation. Clark faced one of the most difficult decisions of his presidency. While he personally opposed segregation, he had to answer to Louisiana’s then governing board of higher education, which influenced Southern’s finances. Clark called for the expulsion of 16 of the students, who were also prohibited from attending other universities in the state.

1956 Southern’s “Marching 100” would evolve to become one of the most talented and renowned college marching bands in the world.

Hayden taught sculpture and drawing for 27 years until his untimely death, and is known worldwide for abstracted, stylized sculptural forms, many of which are on display on the Southern campus and throughout Baton Rouge. In 1964, the University celebrated its 50th anniversary at its Scott’s Bluff location. Southern’s enrollment at the time had swelled to 5,000. There were 300 faculty members and 100 buildings on the main campus, along with a 372-acre research farm north of the university. Also in 1964, Southern University at New Orleans (SUNO) opened, returning the school’s presence to the Crescent City. And in 1967, Southern University opened a campus in Shreveport. Felton Clark retired in 1968 and died in

1970. He is buried, along with his father, on a picturesque spot on campus overlooking the Mississippi River. G. Leon Netterville took over as Southern’s president, and served until 1974. Tragedy struck Southern in 1972 when students, frustrated over an imbalance in public funding for black and white colleges, staged a series of protests on campus. Governor Edwin W. Edwards sent 300 law enforcement officers and an armored personnel carrier to quell the disturbance. Tear gas was used to break up the crowd, but one officer fired a round of live ammunition into the crowd. Student Leonard Brown died on the spot and Denver Smith succumbed to his wounds later at a local hospital.

1980 1975 The F.G. Clark Activity Center, also known as the ‘MiniDome,’ opened in 1975 on the Baton Rouge campus. The construction of this multi-purpose facility marked an era of construction of modern stateof-the-art facilities throughout the SU System.