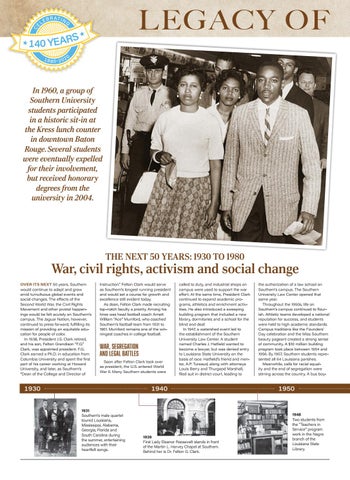 In 1960, a group of Southern University students participated in a historic sit-in at the Kress lunch counter in downtown Baton Rouge. Several students were eventually expelled for their involvement, but received honorary degrees from the university in 2004.

War, civil rights, activism and social change OVER ITS NEXT 50 years, Southern would continue to adapt and grow amid tumultuous global events and social changes. The effects of the Second World War, the Civil Rights Movement and other pivotal happenings would be felt acutely on Southern’s campus. The Jaguar Nation, however, continued to press forward, fulfilling its mission of providing an equitable education for people of color. In 1938, President J.S. Clark retired, and his son, Felton Grandison “F.G.” Clark, was appointed president. F.G. Clark earned a Ph.D. in education from Columbia University and spent the first part of his career working at Howard University, and later, as Southern’s “Dean of the College and Director of

Instruction.” Felton Clark would serve as Southern’s longest running president and would set a course for growth and excellence still evident today. As dean, Felton Clark made recruiting top-notch faculty a priority. Among his hires was head football coach Arnett William “Ace” Mumford, who coached Southern’s football team from 1931 to 1961. Mumford remains one of the winningest coaches in college football.

War, segregation and legal battles Soon after Felton Clark took over as president, the U.S. entered World War II. Many Southern students were

called to duty, and industrial shops on campus were used to support the war effort. At the same time, President Clark continued to expand academic programs, athletics and enrichment activities. He also introduced a sweeping building program that included a new library, dormitories and a school for the blind and deaf. In 1947, a watershed event led to the establishment of the Southern University Law Center. A student named Charles J. Hatfield wanted to become a lawyer, but was denied entry to Louisiana State University on the basis of race. Hatfield’s friend and mentor, A.P. Tureaud, along with attorneys Louis Berry and Thurgood Marshall, filed suit in district court, leading to

1939 First Lady Eleanor Roosevelt stands in front of the Martin L. Harvey Chapel at Southern. Behind her is Dr. Felton G. Clark.

the authorization of a law school on Southern’s campus. The Southern University Law Center opened that same year. Throughout the 1950s, life on Southern’s campus continued to flourish. Athletic teams developed a national reputation for success, and students were held to high academic standards. Campus traditions like the Founders’ Day celebration and the Miss Southern beauty pageant created a strong sense of community. A $10 million building program took place between 1954 and 1956. By 1957, Southern students represented all 64 Louisiana parishes. Meanwhile, calls for racial equality and the end of segregation were stirring across the country. A bus boy-

1948 Two students from the “Teachers in Service” program work in the Negro branch of the Louisiana State Library.