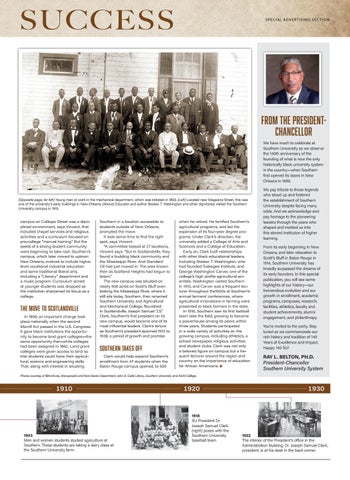 FROM THE PRESIDENTCHANCELLOR We have much to celebrate at Southern University as we observe the 140th anniversary of the founding of what is now the only historically black university system in the country—when Southern first opened its doors in New Orleans in 1880.

(Opposite page, far left) Young men at work in the mechanical department, which was initiated in 1893. (Left) Located near Magazine Street, this was one of the university’s early buildings in New Orleans. (Above) Educator and author Booker T. Washington and other dignitaries visited the Southern University campus in 1915.

campus on Calliope Street was a disciplined environment, says Vincent, that included chapel services and religious activities and a curriculum focused on pre-college “manual training.” But the seeds of a strong student community were beginning to take root. Southern’s campus, which later moved to uptown New Orleans, evolved to include higher level vocational industrial education and some traditional liberal arts, including a “Literary” department and a music program. Curriculum aimed at younger students was dropped as the institution sharpened its focus as a college.

The move to Scotlandville In 1890, an important change took place nationally when the second Morrill Act passed in the U.S. Congress. It gave black institutions the opportunity to become land grant colleges—the same opportunity then-white colleges had been assigned in 1862. Land grant colleges were given access to land so that students could hone their agricultural, science and engineering skills. That, along with interest in situating

Southern in a location accessible to students outside of New Orleans, prompted the move. It took some time to find the right spot, says Vincent. “A committee looked at 27 locations, Vincent says. “But in Scotlandville, they found a budding black community and the Mississippi River. And Standard Oil had just moved in. The area known then as Scotland Heights had begun to boom.” The new campus was situated on nearly 900 acres on Scott’s Bluff overlooking the Mississippi River, where it still sits today. Southern, then renamed Southern University and Agricultural and Mechanical College, flourished in Scotlandville. Joseph Samuel “J.S.” Clark, Southern’s first president on its new campus, would become one of its most influential leaders. Clark’s tenure as Southern’s president spanned 1913 to 1938, a period of growth and promise.

Southern takes off Clark would help expand Southern’s enrollment from 47 students when the Baton Rouge campus opened, to 500

when he retired. He fortified Southern’s agricultural programs, and led the expansion of its four-year degree programs. Under Clark’s direction, the university added a College of Arts and Sciences and a College of Education. Early on, Clark built relationships with other black educational leaders, including Booker T. Washington, who had founded Tuskegee Institute, and George Washington Carver, one of the college’s high profile agricultural scientists. Washington visited Southern in 1915, and Carver was a frequent lecturer throughout the1920s at Southern’s annual farmers’ conferences, where agricultural innovations in farming were presented to black farmers in the state. In 1916, Southern saw its first football team take the field, growing to become a powerhouse among its peers within three years. Students participated in a wide variety of activities on the growing campus, including athletics, a school newspaper, religious activities and student clubs. Clark was not only a beloved figure on campus but a frequent lecturer around the region and country on the importance of education for African Americans.

We pay tribute to those legends who stood up and fostered the establishment of Southern University despite facing many odds. And we acknowledge and pay homage to the pioneering leaders through the years who shaped and molded us into this storied institution of higher learning. From its early beginning in New Orleans, and later relocation to Scott’s Bluff in Baton Rouge in 1914, Southern University has broadly surpassed the dreams of its early founders. In this special publication, you will see some highlights of our history—our tremendous evolution and our growth in enrollment, academic programs, campuses, research, facilities, athletics, faculty and student achievements, alumni engagement, and philanthropy. You’re invited to the party. Stay tuned as we commemorate our rich history and tradition of 140 Years of Excellence and Impact. Happy 140 SU!

1903 Men and women students studied agriculture at Southern. These students are taking a dairy class at the Southern University farm.

1922 The interior of the President’s office in the Administration Building. Dr. Joseph Samuel Clark, president, is at his desk in the back corner.