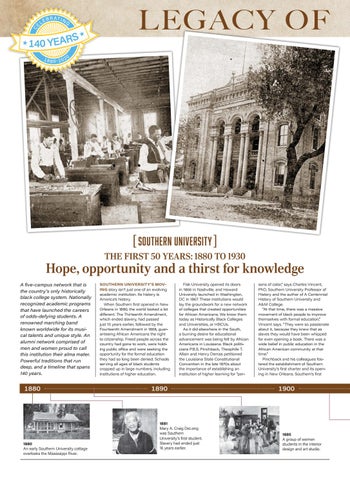 Hope, opportunity and a thirst for knowledge A five-campus network that is the country’s only historically black college system. Nationally recognized academic programs that have launched the careers of odds-defying students. A renowned marching band known worldwide for its musical talents and unique style. An alumni network comprised of men and women proud to call this institution their alma mater. Powerful traditions that run deep, and a timeline that spans 140 years.

SOUTHERN UNIVERSITY’S MOVING story isn’t just one of an evolving academic institution. Its history is America’s history. When Southern first opened in New Orleans in 1880, the world looked a lot different. The Thirteenth Amendment, which ended slavery, had passed just 15 years earlier, followed by the Fourteenth Amendment in 1868, guaranteeing African Americans the right to citizenship. Freed people across the country had gone to work, were holding public office and were seeking the opportunity for the formal education they had so long been denied. Schools serving all ages of black students cropped up in large numbers, including institutions of higher education.

Fisk University opened its doors in 1866 in Nashville, and Howard University launched in Washington, DC in 1867. These institutions would lay the groundwork for a new network of colleges that created opportunities for African Americans. We know them today as Historically Black Colleges and Universities, or HBCUs. As it did elsewhere in the South, a burning desire for educational advancement was being felt by African Americans in Louisiana. Black politicians P.B.S. Pinchback, Theophile T. Allain and Henry Demas petitioned the Louisiana State Constitutional Convention in the late 1870s about the importance of establishing an institution of higher learning for “per-

sons of color,” says Charles Vincent, PhD, Southern University Professor of History and the author of A Centennial History of Southern University and A&M College. “At that time, there was a massive movement of black people to improve themselves with formal education,” Vincent says. “They were so passionate about it, because they knew that as slaves they would have been whipped for even opening a book. There was a wide belief in public education in the African American community at that time.” Pinchback and his colleagues fostered the establishment of Southern University’s first charter and its opening in New Orleans. Southern’s first

1885 A group of women students in the interior design and art studio.