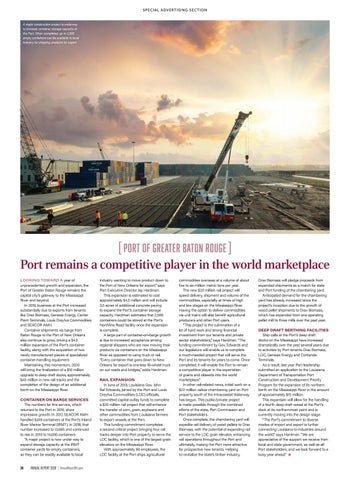 A major construction project is underway to increase container storage capacity at the Port. When completed, up to 2,500 empty containers can be available to local industry for shipping products for export.

[ PORT OF GREATER BATON ROUGE ] Port remains a competitive player in the world marketplace LOOKING TOWARD A year of unprecedented growth and expansion, the Port of Greater Baton Rouge remains the capital city’s gateway to the Mississippi River and beyond. In 2019, business at the Port increased substantially due to exports from tenants like Drax Biomass, Genesis Energy, Center Point Terminals, Louis Dreyfus Commodities and SEACOR AMH. Container shipments via barge from Baton Rouge to the Port of New Orleans also continue to grow, driving a $4.5 million expansion of the Port’s container facility, along with the acquisition of two newly manufactured pieces of specialized container-handling equipment. Maintaining this momentum, 2020 will bring the finalization of a $10 million upgrade to deep draft docks, approximately $40 million in new rail tracks and the completion of the design of an additional berth on the Mississippi River. CONTAINER ON BARGE SERVICES The numbers for this service, which returned to the Port in 2016, show impressive growth. In 2017, SEACOR AMH handled 8,018 containers at the Port’s Inland River Marine Terminal (IRMT). In 2018, that number increased to 13,685 and continued to rise in 2019 to 14,000 containers. “A major project is now under way to expand storage capacity at the IRMT container yards for empty containers, so they can be readily available to local

industry wanting to move product down to the Port of New Orleans for export,” says Port Executive Director Jay Hardman. This expansion is estimated to cost approximately $4.5 million and will include 3.5 acres of additional concrete paving to expand the Port’s container storage capacity. Hardman estimates that 2,500 containers could be stored at the Port’s Northline Road facility once the expansion is complete. A large part of container-on-barge growth is due to increased acceptance among regional shippers who are now moving their products via containers on the Mississippi River as opposed to using truck or rail. “Every container that goes down to New Orleans for export is one less 18-wheel truck on our roads and bridges,” adds Hardman. RAIL EXPANSION In June of 2019, Louisiana Gov. John Bel Edwards, joined by the Port and Louis Dreyfus Commodities (LDC) officials, committed capital outlay funds to complete a $20 million rail project that will enhance the transfer of corn, grain, soybeans and other commodities from Louisiana farmers to export vessels at the Port. This funding commitment completes a second critical project bringing four rail tracks deeper into Port property to serve the LDC facility, which is one of the largest grain elevators on the Mississippi River. With approximately 80 employees, the LDC facility at the Port ships agricultural

commodities overseas at a volume of about five to six million metric tons per year. The new $20 million rail project will speed delivery, shipment and volume of the commodities, especially at times of high and low stages on the Mississippi River. Having the option to deliver commodities via unit trains will also benefit agricultural producers and other Port users. “This project is the culmination of a lot of hard work and strong financial investment from our tenants and private sector stakeholders,” says Hardman. “The funding commitment by Gov. Edwards and our legislature will enable us to complete a much-needed project that will serve the Port and its tenants for years to come. Once completed, it will enable the Port to remain a competitive player in the exportation of grains and oilseeds into the world marketplace.” In other rail-related news, initial work on a $22 million railcar chambering yard on Port property south of the Intracoastal Waterway has begun. This public/private project is made possible through the combined efforts of the state, Port Commission and Port stakeholders. Once complete, the chambering yard will expedite rail delivery of wood pellets to Drax Biomass, with the potential of expanding rail service to the LDC grain elevator, enhancing rail operations throughout the Port and ultimately, making the Port more attractive for prospective new tenants. Helping to revitalize the state’s timber industry,

Drax Biomass will pledge proceeds from expanded shipments as a match for state and Port funding of the chambering yard. Anticipated demand for the chambering yard has already increased since the project’s inception due to the growth of wood pellet shipments to Drax Biomass, which has expanded from one operating pellet mill to three mills over the past year. DEEP DRAFT BERTHING FACILITIES Ship calls at the Port’s deep draft docks on the Mississippi have increased dramatically over the past several years due to activities by Port tenants Drax Biomass, LDC, Genesis Energy and Contanda Terminals. As a result, last year Port leadership submitted an application to the Louisiana Department of Transportation Port Construction and Development Priority Program for the expansion of its northern berth on the Mississippi River in the amount of approximately $15 million. This expansion will allow for the handling of a fourth deep draft vessel at the Port’s dock at its northernmost point and is currently moving into the design stage. “The Port’s commitment to diverse modes of import and export is further connecting Louisiana to industries around the world,” says Hardman. “We are appreciative of the support we receive from local and state government, as well as all Port stakeholders, and we look forward to a busy year ahead.”