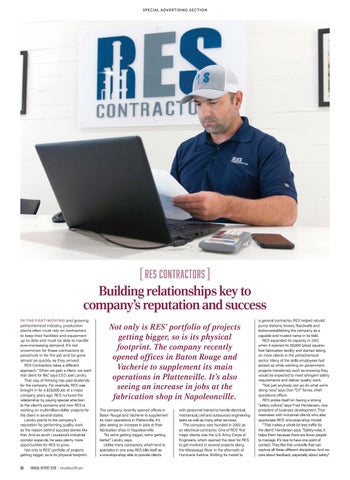 [ RES CONTRACTORS ] Building relationships key to company’s reputation and success IN THE FAST-MOVING and growing petrochemical industry, production plants often must rely on contractors to keep their facilities and equipment up to date and must be able to handle ever-increasing demand. It’s not uncommon for those contractors to parachute in for the job and be gone almost as quickly as they arrived. RES Contractors takes a different approach. “When we gain a client, we want that client for life,” says CEO Joel Landry. That way of thinking has paid dividends for the company. For example, RES was brought in for a $20,000 job at a major company years ago. RES nurtured the relationship by paying special attention to the client’s concerns and now RES is working on multimillion-dollar projects for the client in several states. Landry points to the company’s reputation for performing quality work as the reason behind success stories like that. And as south Louisiana’s industrial corridor expands, he sees plenty more opportunities for RES to grow. Not only is RES’ portfolio of projects getting bigger, so is its physical footprint.

with personnel trained to handle electrical, mechanical, civil and outsourced engineering tasks as well as many other services. The company was founded in 2002 as an electrical contractor. One of RES’ first major clients was the U.S. Army Corps of Engineers, which opened the door for RES to get involved in several projects along the Mississippi River in the aftermath of Hurricane Katrina. Shifting its model to

a general contractor, RES helped rebuild pump stations, levees, floodwalls and locks—establishing the company as a capable and trusted name in its field. RES expanded its capacity in 2012 when it opened its 50,000 (plus) squarefoot fabrication facility and started taking on more clients in the petrochemical sector. Many of the skills employees had picked up while working on government projects transferred, such as knowing they would be expected to meet stringent safety requirements and deliver quality work. “Not just anybody can go do what we’re doing now,” says Don “DJ” Torres, chief operations officer. RES prides itself on having a strong “safety culture,” says Fred Henderson, vice president of business development. That resonates with industrial clients who also appreciate RES’ one-stop-shop model. “That makes a whole lot less traffic for the client,” Henderson says. “Safety-wise, it helps them because there are fewer people to manage. It’s nice to have one point of contact. They like that umbrella that can capture all these different disciplines. And we care about feedback, especially about safety.”