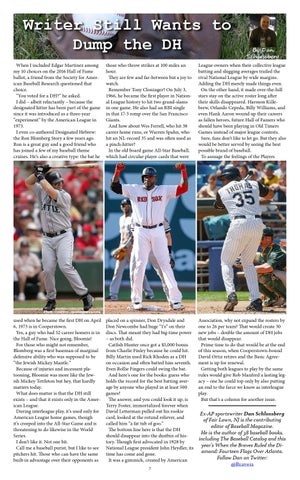 Writer Still Wants to Dump the DH When I included Edgar Martinez among my 10 choices on the 2016 Hall of Fame ballot, a friend from the Society for American Baseball Research questioned that choice. “You voted for a DH?” he asked. I did – albeit reluctantly – because the designated hitter has been part of the game since it was introduced as a three-year “experiment” by the American League in 1973. I even co-authored Designated Hebrew: the Ron Blomberg Story a few years ago. Ron is a great guy and a good friend who has joined a few of my baseball theme cruises. He’s also a creative type: the bat he

those who throw strikes at 100 miles an hour. They are few and far-between but a joy to watch. Remember Tony Cloninger? On July 3, 1966, he became the first player in National League history to hit two grand-slams in one game. He also had an RBI single in that 17-3 romp over the San Francisco Giants. And how about Wes Ferrell, who hit 38 career home runs, or Warren Spahn, who hit an NL-record 35 and was often used as a pinch-hitter? In the old board game All-Star Baseball, which had circular player cards that were

League owners when their collective league batting and slugging averages trailed the rival National League by wide margins. Adding the DH merely made things even. On the other hand, it made over-the-hill stars stay on the active roster long after their skills disappeared. Harmon Killebrew, Orlando Cepeda, Billy Williams, and even Hank Aaron wound up their careers as fallen heroes, future Hall of Famers who should have been playing in Old Timers Games instead of major league contests. Sure, fans don’t like to let go. But they also would be better served by seeing the best possible brand of baseball. To assuage the feelings of the Players

placed on a spinner, Don Drysdale and Don Newcombe had huge “1’s” on their discs. That meant they had big-time power – as both did. Catfish Hunter once got a $5,000 bonus from Charlie Finley because he could hit. Billy Martin used Rick Rhoden as a DH on occasion and often batted him seventh. Even Rollie Fingers could swing the bat. And here’s one for the books: guess who holds the record for the best batting average by anyone who played in at least 500 games? The answer, and you could look it up, is Terry Foster, immortalized forever when David Letterman pulled out his rookie card, looked at the rotund reliever, and called him “a fat tub of goo.” The bottom line here is that the DH should disappear into the dustbin of history. Though first advocated in 1928 by National League president John Heydler, its time has come and gone. It was a gimmick, created by American

Association, why not expand the rosters by one to 26 per team? That would create 30 new jobs – double the amount of DH jobs that would disappear. Prime time to do that would be at the end of this season, when Cooperstown-bound David Ortiz retires and the Basic Agreement is up for renewal. Getting both leagues to play by the same rules would give Rob Manfred a lasting legacy – one he could top only by also putting an end to the farce we know as interleague play. But that’s a column for another issue.

used when he became the first DH on April 6, 1973 is in Cooperstown. Yes, a guy who had 52 career homers is in the Hall of Fame. Nice going, Bloomie! For those who might not remember, Blomberg was a first baseman of marginal defensive ability who was supposed to be “the Jewish Mickey Mantle.” Because of injuries and incessant platooning, Bloomie was more like the Jewish Mickey Tettleton but hey, that hardly matters today. What does matter is that the DH still exists – and that it exists only in the American League. During interleague play, it’s used only for American League home games, though it’s creeped into the All-Star Game and is threatening to do likewise in the World Series. I don’t like it. Not one bit. Call me a baseball purist, but I like to see pitchers hit. Those who can have the same built-in advantage over their opponents as

Ex-AP sportswriter Dan Schlossberg of Fair Lawn, NJ is the contributing editor of Baseball Magazine. He is the author of 38 baseball books, including The Baseball Catalog and this year’s When the Braves Ruled the Diamond: Fourteen Flags Over Atlanta. Follow Dan on Twitter: @Braves1

The Winter 2016 Issue of Baseball Magazine. 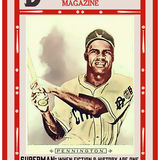