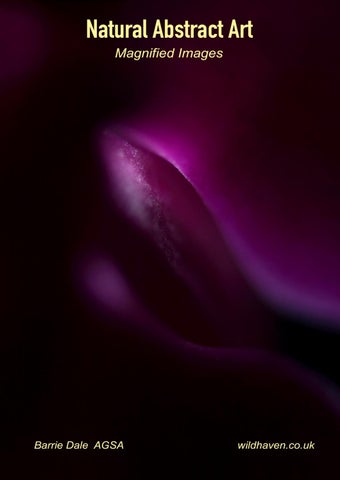 Magnified Images As we have seen in earlier ‘Natural Abstract Art’ articles, photographs of Natural Forms at high magnification yield recognisable images, unrelated to subject matter. Is there a precedent for this?

It’s SpecifIc to the Camera, and it’s Art The images produced in high magnification photography are specific to the camera, and quite different in type from those seen by the eye. The camera focuses on only an exceedingly thin, perpendicular, slice of what is in front of it. Much of the image might be out of focus. In a similar situation the eye would keep on re-focusing. An Artist might handle this by purposely de-focussing. High-magnification images, with no re-focussing, are unique to the camera, and can be seen as being analogous to ‘Art’. Deciding What to Take Deciding which images are worth capturing in high magnification photography is, in this Series, an unconscious act. In producing the image on the front page it was clear straight away that the subject was interesting, and basically ‘astrophysics’ (unconscious decision; then realisation). The conscious decision was to ensure that the specks of light at the top right middle of the picture were in focus.

What Does it Represent? A prominent astro-physicist suggested that the image resembled the way in which a newlyformed star cluster causes excitations in the cloud of hydrogen from whence it came when a new cluster of star forms from a cloud of hydrogen, some of the stars may be very hot and emit X-rays. These rays will impinge on the hydrogen gas that has not yet been used up, and produce a pinky-purple glow.

Escaping the Apocalypse (Petals of Phalaenopsis)

In ‘The Evening after the Apocalypse’ the streamer rising off to the right seemed to provide the ‘zest’; that needed to be in focus.

The Evening After the Apocalypse (Petals of Phalaenopsis)

In ‘Long is the Path and Winding the Way’ it seemed necessary to have some part of the long, curved line in focus, and some not, so that there would variation and interest along the length, and, again, give the viewer something to do.

Long is the Path and Winding the Way (Petals of Phalaenopsis) wildhaven.co.uk

The images in this particular article are of a very pink Phalaenopsis flower. I hope it will be clear that there is plenty of scope for variation, even on a single flower. The next article will be based on a white flower, and it will be completely different.

Images of flowers taken at high magnification are reminiscent of star formation out in deep Universe, distant sunsets, an escape from the Apocalypse, the aftermath of the Apocalypse, and the tortuous route we sometimes need to take.