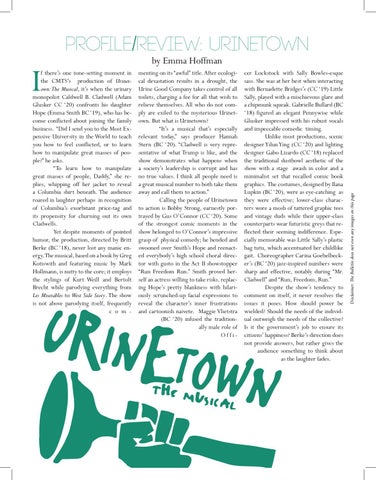 Profile/Review: Urinetown menting on its “awful” title. After ecological devastation results in a drought, the Urine Good Company takes control of all toilets, charging a fee for all that wish to relieve themselves. All who do not comply are exiled to the mysterious Urinetown. But what is Urinetown? “It’s a musical that’s especially relevant today,” says producer Hannah Stern (BC ‘20). “Cladwell is very representative of what Trump is like, and the show demonstrates what happens when a society’s leadership is corrupt and has no true values. I think all people need is a great musical number to both take them away and call them to action.” Calling the people of Urinetown to action is Bobby Strong, earnestly portrayed by Gus O’Connor (CC ‘20). Some of the strongest comic moments in the show belonged to O’Connor’s impressive grasp of physical comedy; he bended and swooned over Smith’s Hope and reenacted everybody’s high school choral director with gusto in the Act II showstopper “Run Freedom Run.” Smith proved herself an actress willing to take risks, replacing Hope’s pretty blankness with hilariously scrunched-up facial expressions to reveal the character’s inner frustrations and cartoonish naivete. Maggie Vlietstra (BC ‘20) infused the traditionally male role of Offi-

cer Lockstock with Sally Bowles-esque sass. She was at her best when interacting with Bernadette Bridges’s (CC ‘19) Little Sally, played with a mischievous glare and a chipmunk squeak. Gabrielle Bullard (BC ‘18) figured an elegant Pennywise while Glusker impressed with his robust vocals and impeccable comedic timing. Unlike most productions, scenic designer Yilun Ying (CC ‘20) and lighting designer Gabo Lizardo (CC ‘18) replaced the traditional dustbowl aesthetic of the show with a stage awash in color and a minimalist set that recalled comic book graphics. The costumes, designed by Ilana Lupkin (BC ‘20), were as eye-catching as they were effective; lower-class characters wore a mosh of tattered graphic tees and vintage duds while their upper-class counterparts wear futuristic greys that reflected their seeming indifference. Especially memorable was Little Sally’s plastic bag tutu, which accentuated her childlike gait. Choreographer Carina Goebelbecker’s (BC ‘20) jazz-inspired numbers were sharp and effective, notably during “Mr. Cladwell” and “Run, Freedom, Run.” Despite the show’s tendency to comment on itself, it never resolves the issues it poses. How should power be wielded? Should the needs of the individual outweigh the needs of the collective? Is it the government’s job to ensure its citizens’ happiness? Berke’s direction does not provide answers, but rather gives the audience something to think about as the laughter fades.

Disclaimer: The Bulletin does not own any images on this page

f there’s one tone-setting moment in the CMTS’s production of Urinetown: The Musical, it’s when the urinary monopolist Caldwell B. Cladwell (Adam Glusker CC ‘20) confronts his daughter Hope (Emma Smith BC ‘19), who has become conflicted about joining the family business. “Did I send you to the Most Expensive University in the World to teach you how to feel conflicted, or to learn how to manipulate great masses of people?” he asks. “To learn how to manipulate great masses of people, Daddy,” she replies, whipping off her jacket to reveal a Columbia shirt beneath. The audience roared in laughter perhaps in recognition of Columbia’s exorbitant price-tag and its propensity for churning out its own Cladwells. Yet despite moments of pointed humor, the production, directed by Britt Berke (BC ‘18), never lost any manic energy.The musical, based on a book by Greg Kotiswith and featuring music by Mark Hollmann, is nutty to the core; it employs the stylings of Kurt Weill and Bertolt Brecht while parodying everything from Les Miserables to West Side Story. The show is not above parodying itself, frequently c o m - 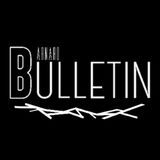