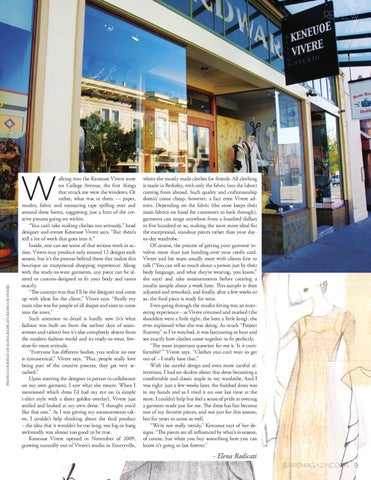 alking into the Keneuoe Vivere store on College Avenue, the first things that struck me were the windows. Or rather, what was in them — paper, muslin, fabric and measuring tape spilling over and around dress forms, suggesting just a hint of the creative process going on within. “You can’t take making clothes too seriously,” head designer and owner Keneuoe Vivere says. “But there’s still a lot of work that goes into it.” Inside, one can see some of that serious work in action. Vivere may produce only around 12 designs each season, but it’s the process behind them that makes this boutique an exceptional shopping experience: Along with the ready-to-wear garments, any piece can be altered or custom-designed to fit your body and tastes exactly. “The concept was that I’ll be the designer and come up with ideas for the client,” Vivere says. “Really my main idea was for people of all shapes and sizes to come into the store.” Such attention to detail is hardly new (it’s what fashion was built on from the earliest days of seamstresses and tailors) but it’s also completely absent from the modern fashion world and its ready-to-wear, fewsizes-fit-most attitude. “Everyone has different bodies, you realize no one is symmetrical,” Vivere says. “Plus, people really love being part of the creative process, they get very attached.” Upon meeting the designer in person to collaborate on my own garment, I saw what she meant. When I mentioned which dress I’d had my eye on (a simple t-shirt style with a sheer golden overlay), Vivere just smiled and looked at my own dress: “I thought you’d like that one.” As I was getting my measurements taken, I couldn’t help thinking about the final product – the idea that it wouldn’t be too long, too big or hang awkwardly was almost too good to be true. Keneuoe Vivere opened in November of 2009, growing naturally out of Vivere’s studio in Emeryville,

where she mostly made clothes for friends. All clothing is made in Berkeley, with only the fabric (not the labor) coming from abroad. Such quality and craftsmanship doesn’t come cheap, however, a fact even Vivere admits. Depending on the fabric (the store keeps their main fabrics on hand for customers to look through), garments can range anywhere from a hundred dollars to five hundred or so, making the store more ideal for the exceptional, standout pieces rather than your dayto-day wardrobe. Of course, the process of getting your garment involves more than just handing over your credit card. Vivere and her team usually meet with clients first to talk (“You can tell so much about a person just by their body language, and what they’re wearing, you know,” she says) and take measurements before creating a muslin sample about a week later. This sample is then adjusted and reworked, and finally, after a few weeks or so, the final piece is ready for wear. Even going through the muslin fitting was an interesting experience – as Vivere trimmed and marked (the shoulders were a little tight, the hem a little long), she even explained what she was doing. As much “Project Runway” as I’ve watched, it was fascinating to hear and see exactly how clothes come together to fit perfectly. “The most important question for me is ‘Is it comfortable?’” Vivere says. “Clothes you can’t wait to get out of – I really hate that.” With the careful design and even more careful alterations, I had no doubts about this dress becoming a comfortable and classic staple in my wardrobe. And I was right: just a few weeks later, the finished dress was in my hands and as I tried it on one last time at the store, I couldn’t help but feel a sense of pride at owning a garment made just for me. The dress has fast become one of my favorite pieces, and not just for this season, but for years to come as well. “We’re not really trendy,” Kenuoue says of her designs. “The pieces are all influenced by what’s in season, of course, but when you buy something here you can know it’s going to last forever.” 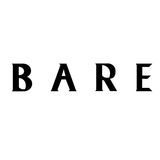 BARE Magazine, UC Berkeley's student-run fashion publication, is proud to present its 8th issue. This issue focuses on the marriage of techn...

BARE Magazine, UC Berkeley's student-run fashion publication, is proud to present its 8th issue. This issue focuses on the marriage of techn...