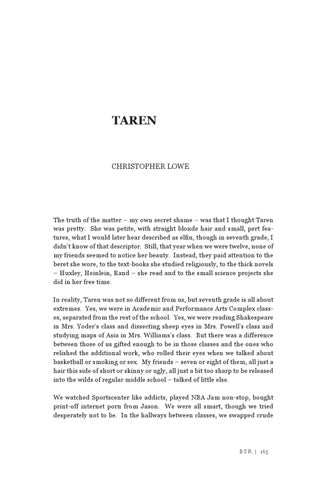 The truth of the matter – my own secret shame – was that I thought Taren was pretty. She was petite, with straight blonde hair and small, pert features, what I would later hear described as elfin, though in seventh grade, I didn’t know of that descriptor. Still, that year when we were twelve, none of my friends seemed to notice her beauty. Instead, they paid attention to the beret she wore, to the text-books she studied religiously, to the thick novels – Huxley, Heinlein, Rand – she read and to the small science projects she did in her free time. In reality, Taren was not so different from us, but seventh grade is all about extremes. Yes, we were in Academic and Performance Arts Complex classes, separated from the rest of the school. Yes, we were reading Shakespeare in Mrs. Yoder’s class and dissecting sheep eyes in Mrs. Powell’s class and studying maps of Asia in Mrs. Williams’s class. But there was a difference between those of us gifted enough to be in those classes and the ones who relished the additional work, who rolled their eyes when we talked about basketball or smoking or sex. My friends – seven or eight of them, all just a hair this side of short or skinny or ugly, all just a bit too sharp to be released into the wilds of regular middle school – talked of little else. We watched Sportscenter like addicts, played NBA Jam non-stop, bought print-off internet porn from Jason. We were all smart, though we tried desperately not to be. In the hallways between classes, we swapped crude