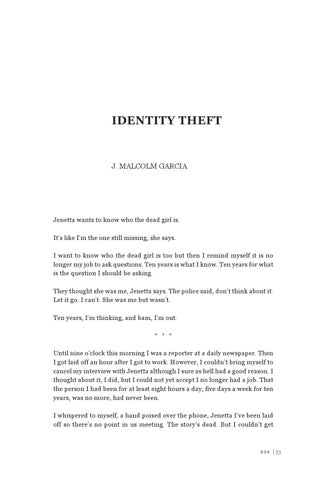 Jenetta wants to know who the dead girl is. It’s like I’m the one still missing, she says. I want to know who the dead girl is too but then I remind myself it is no longer my job to ask questions. Ten years is what I know. Ten years for what is the question I should be asking. They thought she was me, Jenetta says. The police said, don’t think about it. Let it go. I can’t. She was me but wasn’t. Ten years, I’m thinking, and bam, I’m out. * * * Until nine o’clock this morning I was a reporter at a daily newspaper. Then I got laid off an hour after I got to work. However, I couldn’t bring myself to cancel my interview with Jenetta although I sure as hell had a good reason. I thought about it, I did, but I could not yet accept I no longer had a job. That the person I had been for at least eight hours a day, five days a week for ten years, was no more, had never been. I whispered to myself, a hand poised over the phone, Jenetta I’ve been laid off so there’s no point in us meeting. The story’s dead. But I couldn’t get