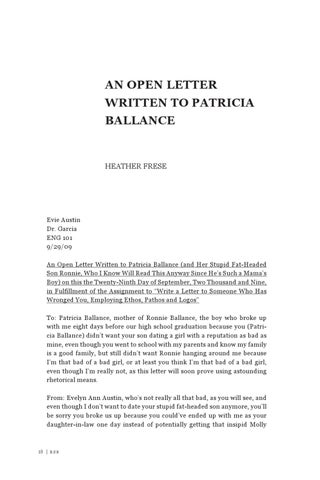 Evie Austin Dr. Garcia ENG 101 9/29/09 An Open Letter Written to Patricia Ballance (and Her Stupid Fat-Headed Son Ronnie, Who I Know Will Read This Anyway Since He’s Such a Mama’s Boy) on this the Twenty-Ninth Day of September, Two Thousand and Nine, in Fulfillment of the Assignment to “Write a Letter to Someone Who Has Wronged You, Employing Ethos, Pathos and Logos” To: Patricia Ballance, mother of Ronnie Ballance, the boy who broke up with me eight days before our high school graduation because you (Patricia Ballance) didn’t want your son dating a girl with a reputation as bad as mine, even though you went to school with my parents and know my family is a good family, but still didn’t want Ronnie hanging around me because I’m that bad of a bad girl, or at least you think I’m that bad of a bad girl, even though I’m really not, as this letter will soon prove using astounding rhetorical means. From: Evelyn Ann Austin, who’s not really all that bad, as you will see, and even though I don’t want to date your stupid fat-headed son anymore, you’ll be sorry you broke us up because you could’ve ended up with me as your daughter-in-law one day instead of potentially getting that insipid Molly