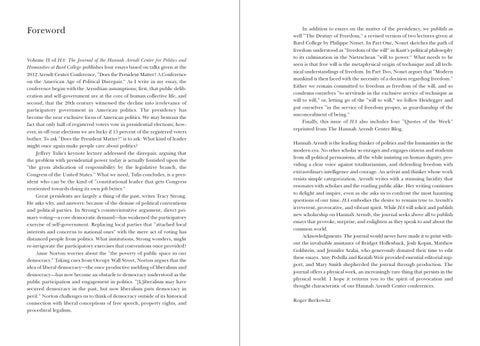 Volume II of HA: The Journal of the Hannah Arendt Center for Politics and Humanities at Bard College publishes four essays based on talks given at the 2012 Arendt Center Conference, “Does the President Matter? A Conference on the American Age of Political Disrepair.” As I write in my essay, the conference began with the Arendtian assumptions; first, that public deliberation and self-government are at the core of human collective life, and second, that the 20th century witnessed the decline into irrelevance of participatory government in American politics. The presidency has become the near exclusive focus of American politics. We may bemoan the fact that only half of registered voters vote in presidential elections; however, in off-year elections we are lucky if 15 percent of the registered voters bother. To ask “Does the President Matter?” is to ask: What kind of leader might once again make people care about politics? Jeffrey Tulis’s keynote lecture addressed the disrepair, arguing that the problem with presidential power today is actually founded upon the “the gross abdication of responsibility by the legislative branch, the Congress of the United States.” What we need, Tulis concludes, is a president who can be the kind of “constitutional leader that gets Congress reoriented towards doing its own job better.” Great presidents are largely a thing of the past, writes Tracy Strong. He asks why, and answers: because of the demise of political conventions and political parties. In Strong’s counterintuitive argument, direct primary voting—a core democratic demand—has weakened the participatory exercise of self-government. Replacing local parties that “attached local interests and concerns to national ones” with the mere act of voting has distanced people from politics. What institutions, Strong wonders, might re-invigorate the participatory exercises that conventions once provided? Anne Norton worries about the “the poverty of public space in our democracy.” Taking cues from Occupy Wall Street, Norton argues that the idea of liberal democracy—the once productive melding of liberalism and democracy—has now become an obstacle to democracy understood as the public participation and engagement in politics. “[L]iberalism may have secured democracy in the past, but now liberalism puts democracy in peril.” Norton challenges us to think of democracy outside of its historical connection with liberal conceptions of free speech, property rights, and procedural legalism.

In addition to essays on the matter of the presidency, we publish as well “The Destiny of Freedom,” a revised version of two lectures given at Bard College by Philippe Nonet. In Part One, Nonet sketches the path of freedom understood as “freedom of the will” in Kant’s political philosophy to its culmination in the Nietzschean “will to power.” What needs to be seen is that free will is the metaphysical origin of technique and all technical understandings of freedom. In Part Two, Nonet argues that “Modern mankind is then faced with the necessity of a decision regarding freedom.” Either we remain committed to freedom as freedom of the will, and so condemn ourselves “to servitude in the exclusive service of technique as will to will,” or, letting go of the “will to will,” we follow Heidegger and put ourselves “in the service of freedom proper, as guardianship of the unconcealment of being.” Finally, this issue of HA also includes four “Quotes of the Week” reprinted from The Hannah Arendt Center Blog. Hannah Arendt is the leading thinker of politics and the humanities in the modern era. No other scholar so enrages and engages citizens and students from all political persuasions, all the while insisting on human dignity, providing a clear voice against totalitarianism, and defending freedom with extraordinary intelligence and courage. An activist and thinker whose work resists simple categorization, Arendt writes with a stunning lucidity that resonates with scholars and the reading public alike. Her writing continues to delight and inspire, even as she asks us to confront the most haunting questions of our time. HA embodies the desire to remain true to Arendt’s irreverent, provocative, and vibrant spirit. While HA will solicit and publish new scholarship on Hannah Arendt, the journal seeks above all to publish essays that provoke, surprise, and enlighten as they speak to and about the common world. Acknowledgments: The journal would never have made it to print without the invaluable assistance of Bridget Hollenback, Josh Kopin, Matthew Goldstein, and Jennifer Szalai, who generously donated their time to edit these essays. Amy Pedulla and Keziah Weir provided essential editorial support, and Mary Smith shepherded the journal through production. The journal offers a physical work, an increasingly rare thing that persists in the physical world. I hope it returns you to the spirit of provocation and thought characteristic of our Hannah Arendt Center conferences. Roger Berkowitz 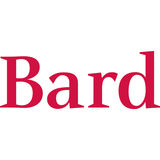