The Subjective Dictionary of Contamination 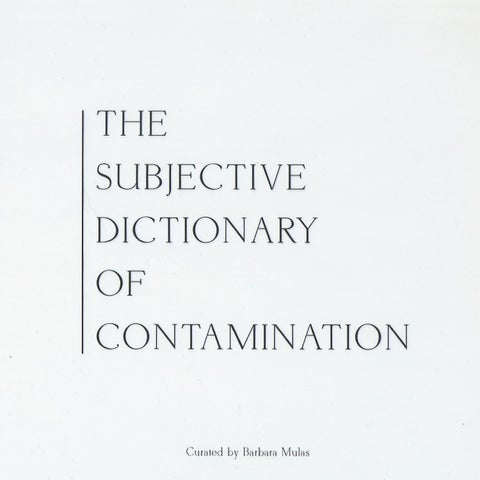 Aknowledgments Introduction Etymology List of Chapters Chapters How To

Aknowledgments This book essentially represents a collaborative experiment. Therefore, I’m thankful to all the people that, in very different ways and degrees, became involved. I’m immensely thankful to all the minds surrounding me: by simply chatting about and questioning the concept of the book, they have helped me to criticise it yet believe in it, they have helped me to carry it on. As a matter of fact, they have contaminated me, and they have allowed me to contaminate them a little bit as well. Another thank you must be to the contributors; to those that could send me a piece of work, yet also to the ones that couldn’t. To the artists that took it seriously, and to the ones that really didn’t. Every single response opened my mind and led me to a wider and deeper understanding of this elusive concept. To conclude, a special thank you to Ellen Hutchinson, Mai Brillet and Max Armstrong-Blake

Introduction The Subjective Dictionary of Contamination is a collaborative project that takes the form of an independent art &amp; social book exploring the subject of contamination. The idea came from a progressive increased awareness of my personal fascination toward this term: only recently I realised that, over several years, I have developed an unconscious attention for this concept, which seems to be permanently present, somehow a constant in my practice. It can certainly take very different shapes and meanings, yet it is still present. However, as soon as I realised that, I also realised the impossibility of its circumscription: the concept of contamination is something highly erratic and vers atile, and defining and delineating can be problematic. It can be applied to different circumstances, and it can embody both negative and positive connotations. In other words, its nature is extremely subjective. To both elude and accommodate this subjectivity, I opted to investigate it likewise: through several subjective visions of it. In order to avoid superficial and easy definitions, its content has been built through an orchestration of subjective approaches and interpretations, which form the chapters of this subjective dictionary. So far, it is composed by twenty-eight contributions exploring the meaning of contamination, which constitute the chapters of the dictionary itself. However, since its essence is to stay open, the dictionary is intended to

grow, transform and expand: indeed, more calls for contributions are planned in the future. The twenty-eight participants come from incredibly different fields, with different backgrounds, perspectives and sensibilities. They have been asked to submit, with no restrictions on media, a personal consideration of this idea, in order to (possibly) surprise, stimulate and expand peopleâ&amp;#x20AC;&amp;#x2122;s consideration of it - including mine, of course. Every contamination chapter is introduced by a concise biography of its author and followed by a small caption outlining that peculiar contamination view. It must be borne in mind th at every work piece represents a unique vision. However, from an overall observation it is visible that most of the participants embraced a metaphysical image of it: they have considered it as something permeating the world, both unavoidable and crucial for humankind. Contamination is in this case described as a daily and ordinary concept, a mandatory presence in peopleâ&amp;#x20AC;&amp;#x2122;s lives and interactions: it thus embodies a neutral/positive signi ficance. A small number though have concentrated on the negative qualities expressed by it, such as pollution, corruption, contagion. Another concept of opposite nature has arisen at this point, and it is the idea of purity. The suggested reading structure represents a curatorial decision: it respects a first name alphabetical order that points on emphasizing the idiosyncratic and non-objective nature of the works. Barbara Mulas

CONTAMINATION I open myself up to doubt

I open myself up to diversity

I do it almost unconsciously

The other’s difference touches me

The other’s difference changes me

The other’s difference becomes a new part of me CONTAMINATION

I walk on the street differently

Than when I know I am alone

CONTAMINATION Still on the street, the others see me They watch me We don’t know each other yet we perceive each other

To understand that inside of me I already have everything from outside The others, the different, they are just the realization of what is dormant inside me. What will remain dormant, following my decisions.

Energy, chemistry and synapses light up an image. A memento. A memento is fixed either for a second or for the whole life. it moves within the memory, it loses visibility. It comes back. It disappears. Details are not so clear, they liquefy, they overlap. Colors get mixed up. first they were vivid, now they de-saturate. The memory materializes only through the image that fix it, a picture. Itâ&amp;#x20AC;&amp;#x2122;â&amp;#x20AC;&amp;#x2122;s immateriality that exists for the whole life of an individual, insinuating itself in the temporal lobe orifice. But it can disappear for ever. amnesia. Memory erasing. With the temporal shift the image becomes more and more liquid. Its definition is inversely proportional to time: after a while it could disappear completely. Past and present melt in one unique image. The result is a contamination between analogic photography and digital production techniques. Cecilia Ceccherini

Marginal Creep In my imagination this photograph is part of an extended series. In reality this image from 2009 is the only one taken with my camera. The remainder have been collected in my mind while driving. I once saw an oilseed rape plant growing where no soil could be seen, at the base of a lamppost on a trafďŹ c island in the centre of the city. The central reservation and the hedgerows of my regular commute are full of it in late May and early June. This ugly, strident yellow seed crop pays no attention to ďŹ eld boundaries and resists segregation. Who can tell whether these self transplanted individuals are the genetically modiďŹ ed ones? Each spring I spot them in more widely distributed places, one turned up in my friends garden a few years back. I continue to record them, if only with my eyes. Fiona Cassidy June 2016

To contaminate is to eliminate and to rejuvenate, to separate and integrate, to digress and progress to motivate and procrastinate to explore the mind to respond to what you find. Each experience erupts on the timeline in which it both creates and determines, yet cannot disrupt the constant progression of its course. Sounds convulse with time, and time itself evolves into motion. Light and shadows converge onto the frame, trading specs and glimmers for the relief of darkness. Undistinguished details become recognisable for a moment until it clicks onto the next. Slaloming through dormant machines murmuring mechanical sounds, the eye in its blurred state glances at passing objects of various tones. Monochrome palette relinquishes distractions of colour, heightened awareness of sights and sounds stored away at the back of the mind to be later revisited.

I’ve built a house with red, brittle bricks. I did it after my parents died. I wanted to put to some use what they had taught me, what they had left me. The lot of land spread on a hill. Juniper trees surrounded it. The foundations were already set, I had to erect the walls. Mortar, brick, mortar, brick. It has been easier than I thought. Two wide windows fitted in. One looked out on West, one on East. The light cut across the living room from dusk to twilight. I reckon my father would have placed his armchair facing West, to bathe in the orangeness of the setting sun and let it light up the amber content of his drink. But now ivy has taken over. I planted the seed. It covers the glass walls as a net of exploded capillaries on a drunkard’s nose. From inside its persistent roots are there for me to see, adhering the chilly, transparent plate. From outside its foliage looks like a curly mane, just like my mother’s before losing her hair. Sun rays are now filtered by the leaves and break in to spot the reigning shadow with golden, odd-shaped dots. I’ve built a house with red, brittle bricks. I used a rusty spatula and an intermittent drill. It has two windows, one faces West, one faces East. The main room used to be sun-filled: bright yellow after the dark, warm red before it. But now ivy has taken over, I let it. The light shatters on the worn-out carpet like a broken mirror, split by the stubborn leaves. I’m cursed with seven years of bad luck every time the sun rises. I’ve built a house with red, brittle bricks. Up on a hill. There would be so much light, for it has two big windows. But they are overgrown with ivy. It has taken over. I trim the creeper during the day, I water it at night.

giving feedback getting a copy of the book

send an email to barbaralamulas@gmail.com@

The Subjective Dictionary of Contamination

DIGITAL COPIES AVAILABLE FOR 5£ / 5€ IF YOU WANT TO GET A COPY PLEASE SEND AN EMAIL TO barbaralamulas@gmail.com __________ The Subjective Dictionary of Contamination is a collaborative project curated by Barbara Mulas that takes the form of an open, independent art & social book exploring the subject of contamination. It aims to go beyond the standard dictionary meaning associated to the concept of contamination through a collection of personal interpretations, visions and considerations, in order to (possibly) surprise, stimulate and expand people’s comprehension and knowledge of it. 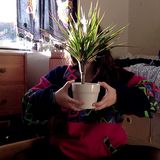